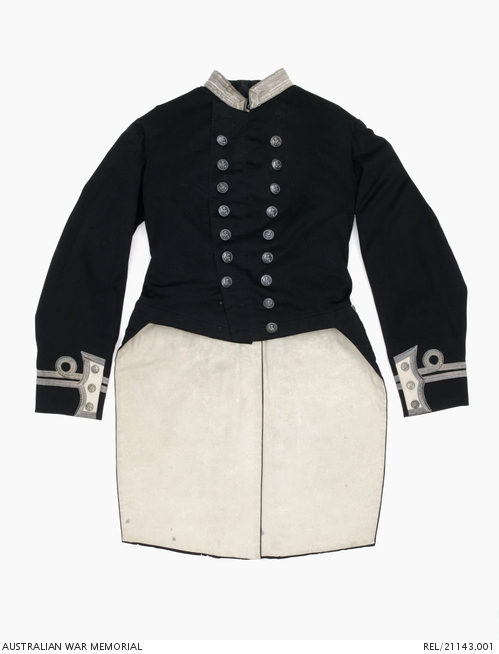 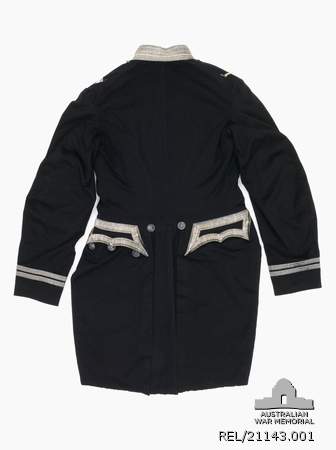 Naval officer's full dress blue/black wool superfine double breasted coat with cutaway tails lined with white wool kerseymere. The stand collar and slashes on the cuffs are of the same white fabric. The triple pointed cuff slashes are edged with silver lace and carry three silver buttons showing a fouled anchor surmounted by a Queen Victoria crown within a rope border. Two silver lace rank stripes, the upper stripe with a curl, for the rank of lieutenant, are carried on each cuff, dating the uniform to 1863, or later. The front of the coat carries ten pairs of the same silver buttons. Two further buttons are sewn to the centre back waist seam. On either side of them is a triple pointed pointed flap edged with silver lace. Three silver buttons are sewn in a horizontal row beneath each flap. Sewn to the shoulders are brass loops for attaching epaulettes.

The body of the coat is padded and lined with quilted black silk. The sleeves are lined with cotton and silk. There is no maker's label present.

This coat was worn by Lieutenant Frederick Oliver Handfield during his service in the Victorian Navy in the 1860s. Handfield was born to Commander Edward and Louisa Sarah (nee Coakley) Handfield in Dublin on 15 April 1830 and joined the Royal Navy as a cadet on his fourteenth birthday. Two years later he qualified as a midshipman and in June 1852 was appointed mate in HMS 'Royal William' and subsequently in HMS 'Trincomalee'.

For two years, between 1854 and 1856, he was posted to HMS 'Rattlesnake' as an acting lieutenant. In 1854 'Rattlesnake' was ordered to the Arctic in search of the 'Monongahela', lost in late 1853 and thought to have been taken up into the
arctic by the ice. Although the 'Rattlesnake' 'coasted up to the utmost limits of navigation allowed by the ice' nothing was found of the 'Monongahela', although local natives had reported seeing a ship of her description sailing toward the Arctic Ocean.

In all probability it was for this deployment that Handfield was awarded the Arctic Medal. The medal, seen on Handfield's uniform in the photograph held in the Memorial's collection (P01359.001), was lost while he attended a reception for the Duke of Edinburgh in Melbourne in November 1867.

Following postings to HM Ships 'London' and 'Trident', Handfield resigned from the Royal Navy to follow his brothers to Melbourne in 1858. In August 1861 he enlisted in the Victorian Navy and was posted as a mate to Her Majesty's Colonial Steam Sloop 'Victoria' under the command of Captain William Henry Norman.

Almost immediately after his posting, the 'Victoria' embarked for the Gulf of Carpentaria in search of the explorers William O'Hara Burke and William John Wills, feared lost in the interior the previous month. Accompanying the 'Victoria' was the 'Firefly', chartered to carry the explorer William Landsborough and his party for an overland trek in search of the missing men.

The 'Firefly' grounded on a reef in the Coral Sea during a gale and sustained considerable damage before being refloated. Captain Norman placed Handfield in charge of the crippled ship on 20 September prior to it being put under tow behind the 'Victoria', with the pumps going night and day to keep her afloat. It was then grounded on the banks of the Albert River and used as a depot for the exploration party. Handfield remained in charge of the depot until the wreck was abandoned, and the expedition left the area in early 1862. The 'Victoria' returned to Melbourne on 31 March 1862. Soon after returning Handfield married Mary Ellen Tatham at St Peters Church in Melbourne.

In January the following year, Handfield marched as part of the HMCSS 'Victoria' contingent in the Burke and Wills funeral procession. On 11 May 1865 he was appointed to the naval training ship, 'Sir Harry Smith', as sub-lieutenant and by September 1867 was a lieutenant in command of the vessel. During the latter years of his naval career he was made superintendant over both the 'Sir Harry Smith' and the prison hulk 'Deborah', now juvenile reformatory ships. He retired from the navy on 31 December 1870 and was working for the Education Department when he died on 18 July 1886.