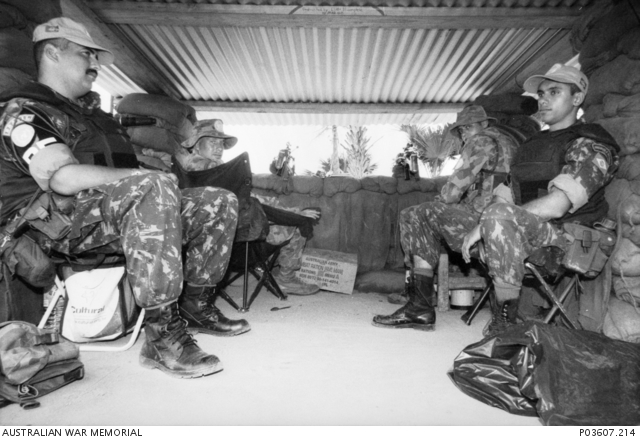 Two unidentified members of the 5th/7th Battalion (Mechanised), The Royal Australian Regiment (5/7 RAR) (rear), and two members of the Brazialian Military Police (front), guard Junction Point A checkpoint on border of East and West Timor. The structure is made from corrugated iron, timber and sand bags. Two Minimi machine have been set up on the sandbagged wall. Refugees returning to East Timor from West Timor are checked for weapons and explosives as they pass through the checkpoint. Following the overwhelming vote for independence by the East Timorese on 30 August 1999 in the United Nations (UN) sponsored referendum, the pro-Indonesian militia launched a campaign of destruction, arson and murder, killing approximately 1500 people and forcing 300 000 others into West Timor as refugees. On 15 September, the UN issued a resolution, calling for a multinational force to restore peace and security and facilitate humanitarian assistance operations. By 20 September 1999, the first coalition force began deploying to East Timor as part of Australian-led International Force for East Timor (INTERFET). Five months later in February 2000, INTERFET handed control of military operations over to the United Nations Transitional Administration in East Timor (UNTAET), who were to maintain security, establish an effective administration and develop civil and social services.