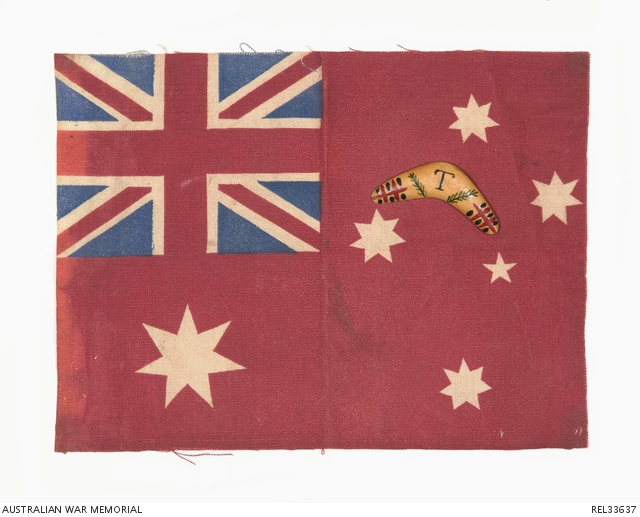 A small screen printed cotton Australian red ensign to which a small souvenir painted wooden boomerang has been pinned. The flag bears a central vertical fold line and is slightly discoloured from water damage down its left side. The boomerang has been decorated with a 'T', placed centrally, and on each side, a sprig of wattle; each end is painted in a black and red cross-hatch design. A small brass safety pin is glued to the reverse of the boomerang.

Mr William (Bill) Muldoon III, from the United States wrote, 'In 1943 my elementary school teacher arranged for some of our class to have pen pals in foreign countries. Mine was a young boy from Darwin, Australia. We corresponded regularly, but the slow transport of letters by sea, especially with a World War raging, was agonisingly slow. Through our letters we learned a lot about our respective nations and about each other. I learned that Darwin was being constantly bombed by the Japanese but only learned many years later that there were about 70 air raids and that several hundred Aussies were killed. During that period, the letters stopped and I never knew if he might have been killed in one of those air raids. We exhanged flags and I recently located the one he sent me.'