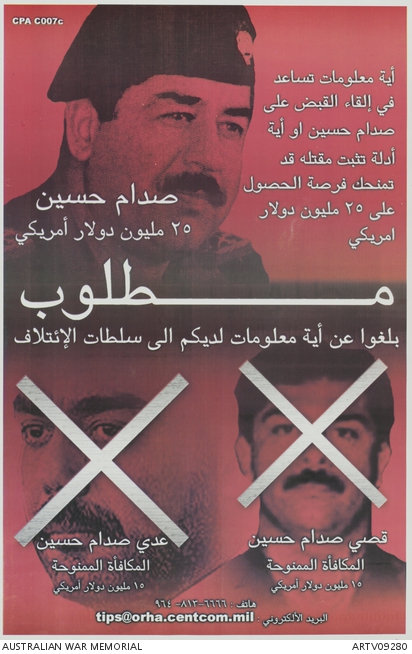 In August 2003, the Coalition Provisional Authority (CPA) released a series of 'most wanted' posters for Saddam Hussein, announcing a $US25 million reward for him.They were intended to be distributed by Iraqi police and US soldiers in Baghdad and throughout Iraq as part of a drive to capture Saddam Hussein. The US State Department Rewards for Justice program intended to fund the $25 million reward and Iraqi citizens with information on Hussein were advised to call a Baghdad hotline, staffed by Arabic speakers, or to approach Iraqi police or coalition troops. The CPA was the international body, established by the United States, that governed Iraq from April 2003 until 30 June 2004. It assisted in re-establishing security, essential services, economy and governance in Iraq, as well as defining legal frameworks for Iraqi ministries and reconstituting the country's infrastructure. The poster features a head and shoulders portrait Saddam Hussein in uniform, appearing above portraits of his two sons, Uday, on the left and Qusay, on the right, who were killed by coalition troops in 2003. Large crosses partially obscure the faces of Hussein's sons. The poster was collected in Iraq by Colonel Michael Joseph Kelly, an Army lawyer, who was seconded as a legal advisor to the CPA , assisting in the arraignment of Saddam Hussein before the Iraqi Special Tribunal judge, Ra'id Juhi in July 2004.