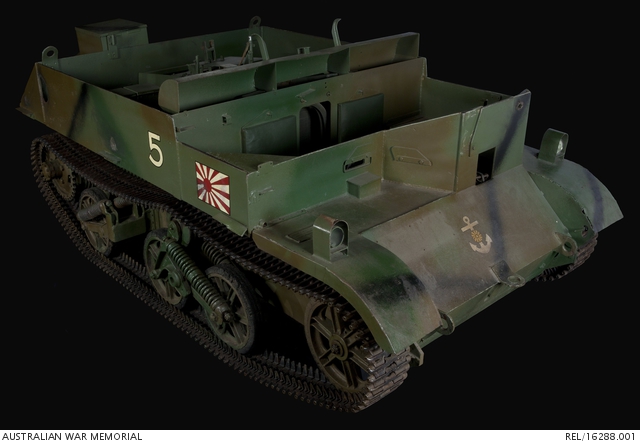 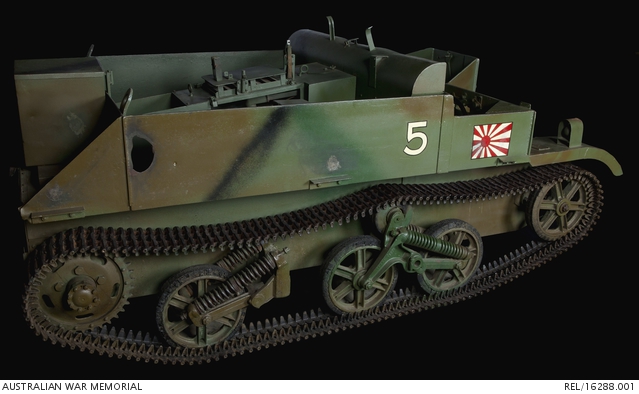 Australian Machine Gun Carrier, Local Pattern 2, of welded steel construction. The vehicle's serial number is 1022. AIF registration number is T-16574. The vehicle has a double front bogie and a single rear bogie, in a system known as the Horstmann slow motion suspension system. The front bogie incorporates a single track return roller. The drive sprocket is at the rear of the vehicle, and the idler is at the front. Bogie wheels are rubber tyred. Tracks are of malleable cast iron. Engine is a Ford 239 cubic inch side valve V8 manufactured by Ford Canada. Suspension incorporates track displacement steering, as well as track brake steering.

The exterior has been repainted dark green and olive drab. A Japanese 'rising sun' emblem has been painted on each side of the vehicle to reflect its status when captured by the Japanese during the Second World War. The vehicle's hull plate above the machine gun aperture is pierced by shrapnel.

In December 1941 this Local Pattern Carrier was shipped from Melbourne, aboard the troop ship SS Bantam, to Ambon in the Netherlands East Indies. It served with Gull Force, which included the 2/21 Australian Infantry Battalion, in the defence of Ambon. It was captured by Japanese forces in early 1942 and used by them for the duration of the war.

Australian troops discovered the vehicle abandoned in a dump near a wharf in the town of Ambon in late 1945. From file 743/1/25 dated 10 Nov 1945: "S/Sgt Stewart, who has recently visited Ambon reports he saw the undermentioned items which may be of interest to the AWM:...(b) Bren Carrier used by 8 Div. The Japs painted a flag on it but this has been covered with a new coat of paint since the occupation. However, the flag is still faintly visible. It is located in a dump near the wharf at Amboina." In a telex from Landops Morotai dated 14 Dec 1945 two Carrier MGs at Ambon are referred to as follows: "Carrier MG LP 2. Serial No.1035. Engine Type Nos. 091A 6050 B2. Gearbox 33 F 7222. Make: Ford. Condition: Repairable. Markings: Large figure '3' near side" and "Second Carrier MG LP2 Same details except Serial No.1022. Large figure '5' near side". It is not known what happened to S/N 1035. A Captain Hodge ascertained that they were issued at Darwin early in December 1941 to Gull Force. By 4 January 1946 S/N 1022 was located in 1 Australian Military History Field Team Brigade HQ transport lines. Also that month its condition was reported: "The Bren Carrier is in going order although the tracks will not stand up to very much more running about. Odd fittings are also missing from the Carrier. As far as can be ascertained both pieces of equipment were used by 2/21 Aust Inf Bn in the defence of Ambon." On 28 January 1946 1 Aust MH Fd Team reported: "...the 'Winchester Victory' called at Ambon before coming to Morotai...I signalled HQ 33 Bde requesting them to load...the Bren Carrier and the 2 pdr Tank Attack (TA) gun. A few days ago I received a reply advising me that this had been done."