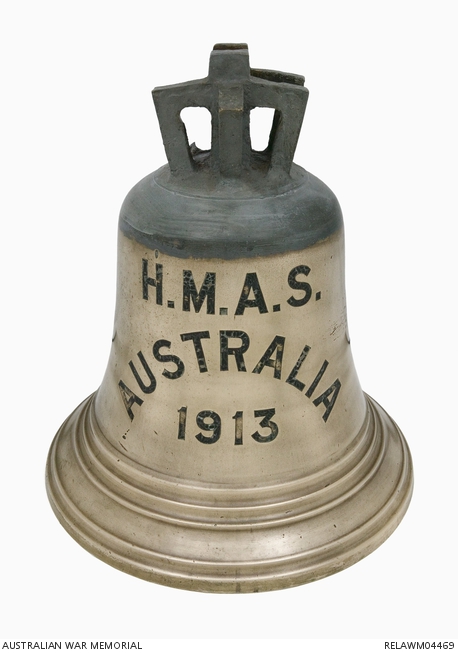 Brass bell from battle cruiser HMAS Australia. Black lettering on both sides of the bell reads 'H.M.A.S. AUSTRALIA 1913'. The headstock is painted grey and part of the attachment point has broken off and is missing.

This is the ships bell from the battle cruiser HMAS Australia (I). Bells have several important uses in the world's navies and merchant fleets. They are used for signalling, keeping time and sounding alarms, which maintain a ship's routine and readiness. As well as this functional use they are used in ceremonial occasions.

HMAS Australia was built in Scotland from 1910-13. On completion she sailed for Australia and, on 4 October 1913, led the cruisers and destroyers of the fleet unit into Sydney Harbour to public acclaim. With the outbreak of the First World War, HMAS Australia became the flagship of the force that captured the German colonies in the southern Pacific. She led a force which captured Rabaul on 13 September 1914 before proceeding to Samoa. With no German forces left in the South Pacific, HMAS Australia was deployed to the United Kingdom. En route she sank the German auxiliary Eleanore Woermann. On 8 February 1915 she became the flagship of the 2nd Battle Cruiser Squadron of the Royal Navy's Grand Fleet. Her service with the Grand Fleet consisted of a series of frequent patrols and exercises. She was twice rammed, firstly on 22 April 1916 by HMS New Zealand. This led to her missing the Battle of Jutland, the major British naval engagement of the war. She was rammed again by HMS Repulse in December 1917. HMAS Australia carried out experimental aircraft operations in 1918 and led the port column of the Grand Fleet at the surrender of the German High Seas Fleet on 21 November 1918. Returning home in 1919, she suffered a mutiny upon reaching Fremantle, Western Australia. Quite obsolete, she became a training vessel in Westernport until scuttled off Sydney Heads on 12 April 1924.