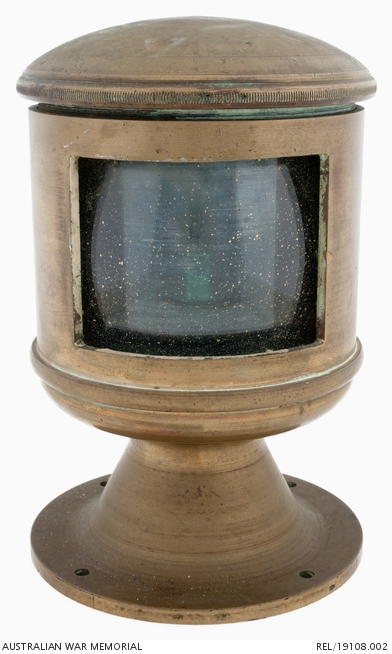 Heavy (2.7 kg) circular cast and milled brass running light housing, with a cut-out in main body, revealing a thick circular green lens. The domed top of the light has a straight-line knurled grip around the circumference, and can be screwed off to enable the electrical globe to be replaced. The interior fitting is brass and ceramic, while the green light lens is fitted with a copper washer and white rubber seals at top and bottom. The interior of the dome is painted in a cream paint. The coned mounting is hollow to allow the electrical cables to be inserted, and there are four mounting holes arranged around the base. The glass is cracked and a portion is missing.

This is one of two heavy brass electric running lights which were originally mounted on USS Houston's Captain's Barge. They were received as payment by a medical doctor based at Gosford, NSW, in 1964, by one of his (unidentified) patients. The doctor was told they came from the Captain's motor launch from USS Houston. The clinker built ship's boat was offloaded at Darwin Harbour, along with inflammable stores before USS Houston's last battle. When news of the sinking of USS Houston and HMAS Perth was received, the unknown patient, who served in the Australian Army in Darwin and later Papua New Guinea, souvenired the lights. In 1990 the lights were presented to the US Embassy in Canberra, which subsequently donated them to the Memorial in a public ceremony on 1 March 1990, at the instigation of then Legal Attache, Mr Ivian C Smith.

In the wake of rapid Japanese advances towards Timor, Java and New Guinea, USS Houston had left Darwin on 15 February, accompanying a small convoy to reinforce the garrison on Timor with both American troops and 2/4 Pioneer Battalion. They were forced to return to Darwin on the afternoon of the next day when it became obvious they had been detected by the Japanese, with news the Japanese were about to land on Timor. The transports were left in Darwin and the USS Houston headed for Java to assist the Dutch oppose the Japanese at Tjilatjap, in company with HMAS Perth, HMS Exeter, and the Dutch ships HMNS Java and De Ruyter plus ten destroyers. After meeting the Japanese fleet in the Battle of the Java Sea where both the Dutch ships were sunk, both Houston and Perth were sunk within minutes of each other when they chanced upon the heavily escorted Japanese landing force at Banten Bay, in the early hours of 1 March 1942, in an action known as the Battle of Sunda Strait. Survivors from both ships were rescued (302 from Perth and 368 from Houston) and spent the remainder of the war as prisoners of the Japanese. Many died from overwork or starvation.

The Captain's Barge was most likely unloaded before USS Houston left Darwin on 15 February. Apart from this pair of running lights, no other relics of the barge are known and no clues can be discovered regarding its ultimate fate.