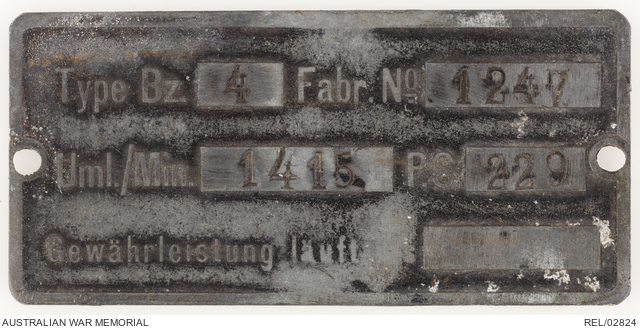 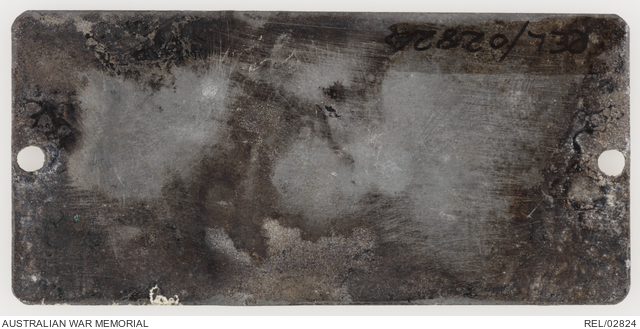 See REL49172 for Data plate showing Military Number. May be from same aircraft as both plates came from same collection.

Data plates gave the manufacturer's and the military's numbers of the engine for bookkeeping purposes.

Karl Benz started his first firm at Mannheim in 1871 to build two stroke engines. In 1906 he became associated with aviation when he built engines for non-rigid airships.

The Benz Bz.IV was a six-cylinder inline water cooled aero engine produced from 1916 and some 6,400 were produced. Benz engine were confined to the vertical type until late in the war when eight and twelve-cylinder types were experimented with. All Benz engines bear a certain resemblance. The overhead valves are operated through push rods and rockers. The separate cylinders are made with sheet metal water jackets welded to either a cast-iron cylinder or to a cast-head cylinder with a screwed in steel barrel. They were known for their reliability and ease of maintenance.

The Benz Bz.IV was of nominal 200-hp but capable of 220-hp at 1400 rpm. There were two inlet and outlet valves and two spark plugs per cylinder. The engine had two carburettors and two magnetos. This engine was used in two-seater and Risenflugzeug (Giant) aircraft as well as prototypes. Common types that used the engine are the AEG J.I and Albatros J.I armoured infantry co-operation/ground attack aircraft. Reconaissance aircraft that used the engine included the Albatros C.II, Ago C.IV, Halberstadt C.V, LVG C.VI. The Pfalz D.XII single-seat fighter also was fitted with this engine. Marine aircraft included the Friedrichshafen FF.49 floatplane as well as the Friedrichshafen G.II landplane bomber.