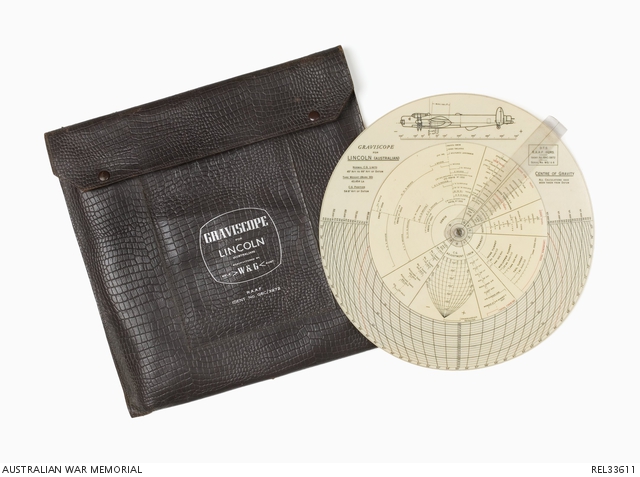 Plastic graviscope consists of a 277mm white disc, printed on both sides, overlaid on one side by a 224mm disc and the other side by a 175mm disc. All discs located by central screw, to which is attached a 160mm long x 25mm wide clear celluloid strip.

The graviscope is a computing device, which in aircraft was used for measuring the centre of gravity in an aircraft. This would vary depending on crew, bomb load, fuel and stores carried. It was used in the British designed but Australian manufactured, Government Aircraft Factory (GAF) Lincoln heavy bomber, which was operated by the Royal Australian Air Force (RAAF) in the years following the Second World War. This aircraft was originally a derivative of the famous Avro Lancaster bomber. The Lincoln was used by both the RAAF and the Royal Air Force in operations against Malayan Communist terrorists during the Malayan Emergency, 1948-1960. This graviscope is of the type designed for and used by RAAF and RAF aircrew who operated this aircraft.