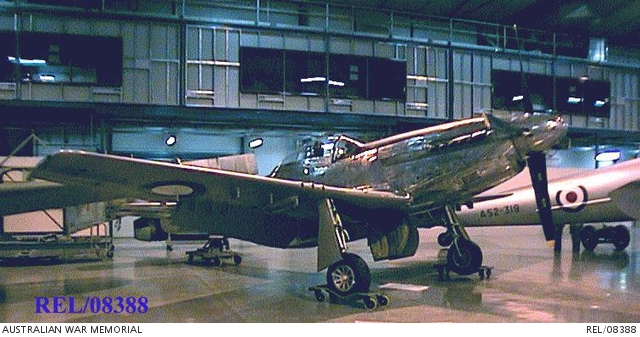 One of 400 of the P-51D-20NT model manufactured by North American Aviation's Dallas, Texas plant, this ex USA aircraft was received at 1 Aircraft Depot, Laverton, Victoria (Vic) on 25 June 1945 to be used for testing purposes. The following month it was received at No. 2 Operational Training Unit, Mildura, Vic. On 5 June 1946 it was received at No.1 Aircraft Performance Unit, Laverton, Vic, for trials. It was placed in storage at RAAF Point Cook, Vic, in June 1948 until 3 June 1950, when the airframe was transferred to the Melbourne Technical College, Carlton for instructional purposes. Engine Serial No. 332509 was removed before transfer.

The aircraft was acquired by the AWM in February 1983, and restoration of aircraft to static display standard was undertaken at RAAF Base Point Cook. Both the wings had been removed outboard of the undercarriage but with the original wing stubs retained and several small holes cut into the rear fuselage. A set of wings (Wing Numbers M29/32) were supplied by Aeronautical Research Laboratories, and part of the original batch of US supplied components selected to fit the aircraft. The original wing stubs were disposed of. The engine was cleaned and inhibited (not overhauled). Rear fuselage skins replaced. These have been completed using components taken from the original aircraft.