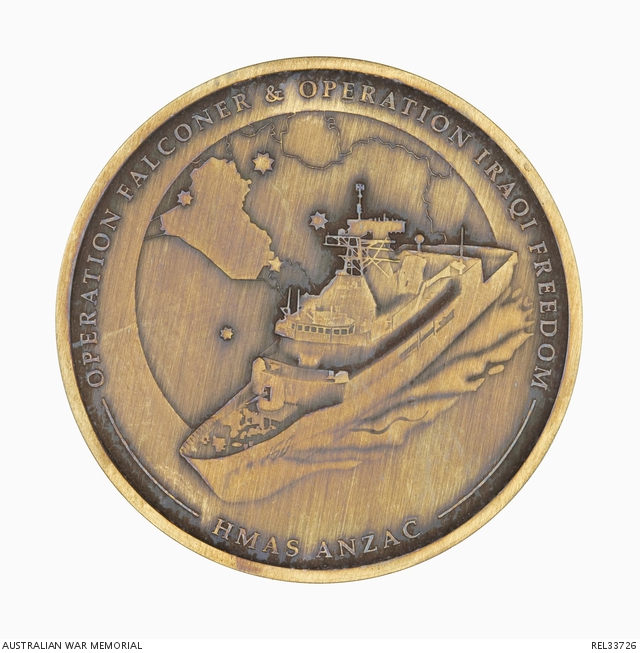 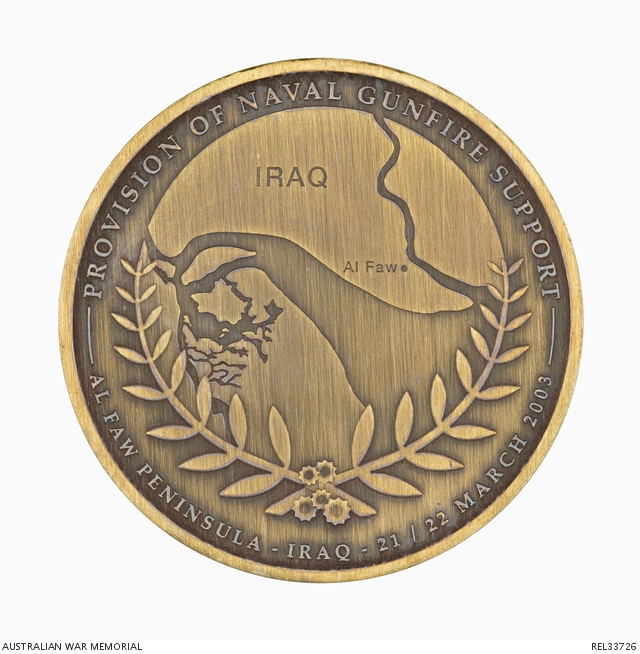 Brass medallion with the obverse featuring an image of HMAS ANZAC sailing, superimposed upon a map of Iraq, and surrounded by an inscription reading 'Operation Falconer & Operation Iraqi Freedom - HMAS ANZAC'. On the reverse is a close up map of the Al-Faw Peninsula in Iraq with a wreath below, surrounded by the inscription 'Provision of Naval Gunfire Support - Al-Faw Peninsula - Iraq- 21/22 March 2003'. The medallion is encased in a two part clear protective plastic cover and contained within a green and white official Perth Mint case.

This medallion was produced by the Perth Mint to commemorate the naval gunfire support given by HMAS ANZAC to the assault on the Al Faw Peninsula of Iraq during Operation Falconer, on 21/22 March 2003. It is one of two hundred medalions, made from twelve brass casings from 5inch (127mm) high explosive naval shells, fired by HMAS ANZAC in support of the British and United States Marine Corps attack on Al Faw Peninsula during 21 and 22 March 2003. The shell casings were initially melted and rolled into strips by the Fremantle Foundry and Engineering Company, before being passed to the Perth Mint. The medallion was conceived by the Gunnery Officer of HMAS ANZAC, Lieutenant Commander Ivan Ingham, who fired the first shots from the ship at Al Faw. The medallion designs were produced by his fiftteen year old son, Harry Ingham.