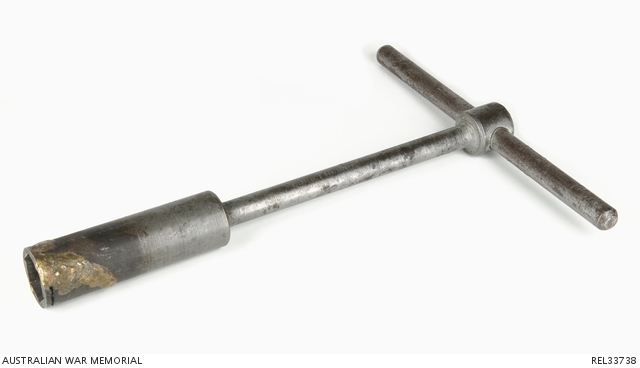 Metal single ended spark plug removal tool. On the shaft is impressed 'FHI 36944/2 36R/I20699 ->'. The end of the shaft shows signs of heavy use and repair using welding equipment. The handle has numerous vertical indentations suggesting heavy use and being hit by other tools.

Hawker Sea Fury aircraft were operated by the Royal Australian Navy during the Korean War 1950 to 1953. Flying from the aircraft carrier HMAS Sydney, these aircraft conducted hundreds of ground attack sorties against North Korean and Communist Chinese forces and installations. The immensely big and powerful Bristol Centaurus 2,480-horse powered engine was used in the Hawker Sea Fury Fighter-Bomber. This engine had 18 cylinders, each having spare plugs and therefore requiring the use of this particular tool in removing and re-inserting new spark plugs.