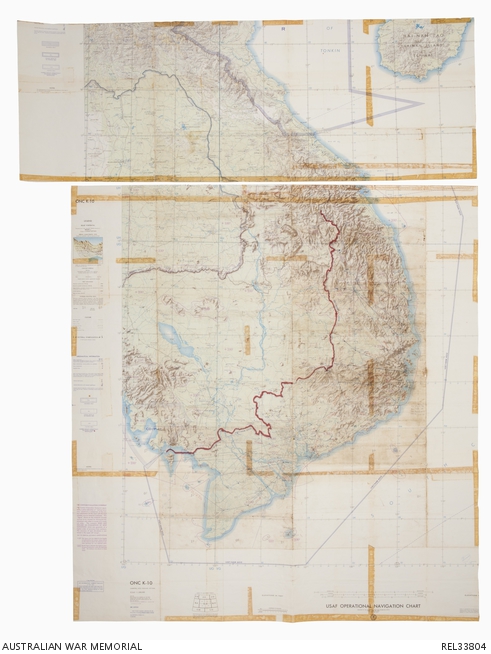 Standard issue United States Air Force 'Operational Navigation Chart' map made from paper. The object is made up from two separate, and slightly overlapping maps which were stuck together using cellotape 'stick-tape' which has now deteriorated. There are extensive yellow cello-tape marks on the object. On the map are many hand marked routes over South Vietnam with corresponding ranges with black and red pen. Also hand written in blue pen ink is 'Nha Trang 34 / Phan Rang 75 / Can Ranh Bay 71 / Ban Me Thuot 45'.

This map was carried by 43754 Flying Officer (FO) Brian Geoffrey Young on the majority of his flight missions with 35 Squadron RAAF during the Vietnam War. FO Young cut and taped the map into a rectangular shape so it could easily fit into his flying suit pocket. FO Young served with 35 Squadron from 9 September 1966 to 14 September 1967