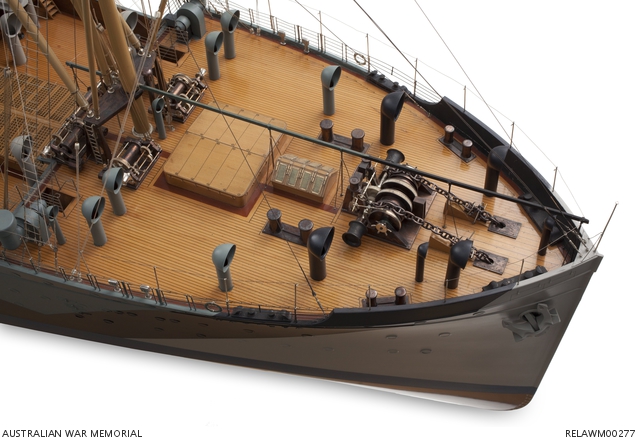 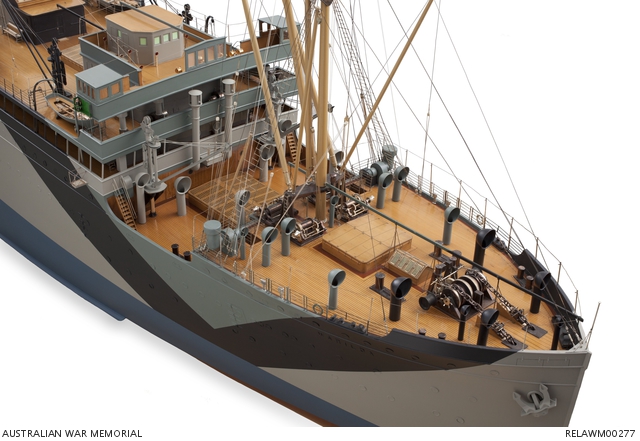 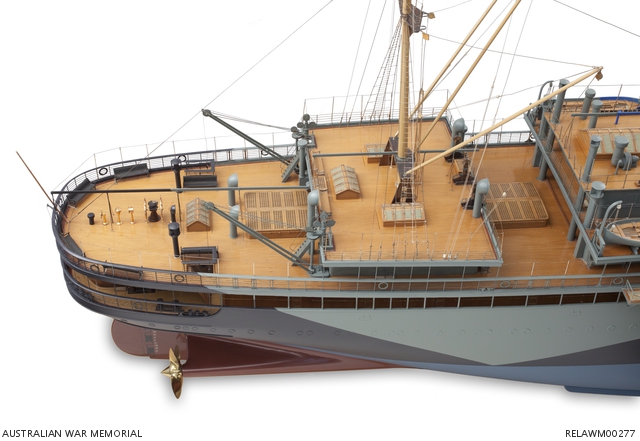 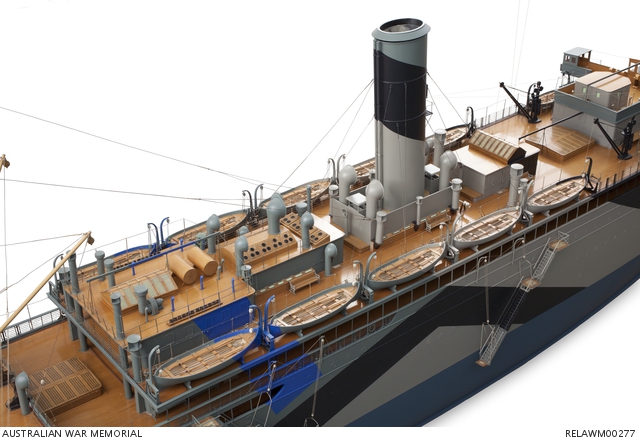 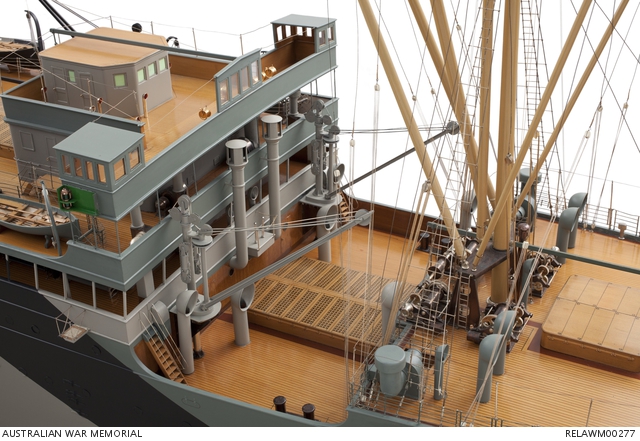 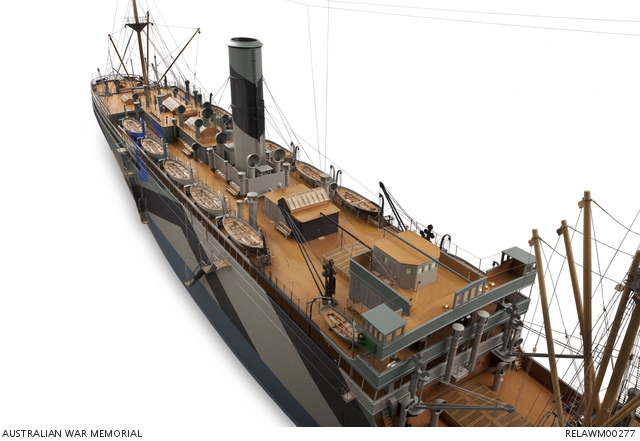 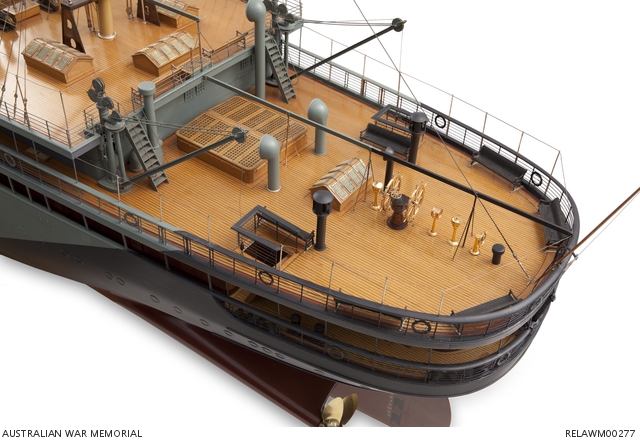 A 1/30 scale full hull shipbuilder’s model of H.M.A.T. 'Warilda', painted to represent its service as an Ambulance Transport, with sawtooth dazzle camouflage. The model measures 4092mm in length and sits on brass hull supports.

The hull is constructed from wood. Detail elements such as rudder and propellers, masts and cranes, funnel, covered companionways, detailed lifeboats, and hull accommodation ladders with their lifting davits are fabricated from brass. Most of the metal elements are soldered.
Previously located in the offices of the the Adelaide Steamship Company Ltd before acquisition by the Australian War Memorial, this model was originally finished in the colours of the company, before being overpainted in its current sawtooth dazzle camouflage.

The 'Warilda' was built by William Beardmore & Company, Dalmuir, Clydebank, Scotland, Yard No 505 in 1912 for the Adelaide Steamship Company. A steam vessel capable of 16 knots, it was 7,713 gross tonnes and measured 413 by 57 feet (125.8 x 17.37m). Initially it was requisitioned as His Majesty's Australian Troopship, A69. From 25 July 1916, the 'Warilda' was taken over by the British Admiralty and converted to a Military Hospital Ship at Liverpool and was used on the Southampton - Le Havre route. The ship could carry 546 casualties.
Two sister ships to ‘Warilda’ were also built by William Beardmore and almost identical in layout: SS 'Wandilla' (1912) and SS 'Willochra' (1913). Both were also requisitioned and used as troop transports during the First World War. The 'Wandilla' was also converted to a hospital ship; and was also torpedoed by a U-Boat in 1918, but the torpedo failed to explode.
Due to Germany’s threat, in early 1917, to sink any vessel in the English Channel, "the Admiralty decided to remove all distinctive exterior markings from hospital ships employed in this area. They were therefore re-painted, camouflaged, armed with a 4.5 inch gun at the stern, and thenceforth bore every semblance of ordinary transport ships. They were known as Ambulance Transports." (AWM 7 – Warilda [5]).
Captain James Sim, who captained the 'Warilda' throughout the war, noted that this change to Ambulance Transport occurred from 18 April 1917, writing "she has ceased to claim official status as a hospital ship…no longer flies the Red X and will be armed for her own defence." (AWM7 – Warilda [3])
On 3rd August 1918, at 1.30 am, while on a voyage from Le Havre, the 'Warilda' was torpedoed and sunk by the German submarine UC-49 in the English Channel. There were 471 sick and wounded on board, 439 of these were cot cases. The losses were very heavy - 115 patients, one nursing sister, and an Royal Army Medical Corps orderly. The rest of the patients, staff and crew were evacuated from the ship within an hour. She sank 30 minutes later.
While no evidence can be traced to ascertain who built this shipbuilder’s model, it is likely to have been constructed by the same firm that built the original ship. Additionally, its original owners describe it as a 'maker's model'. The model was requested from the owners, the Adelaide Steamship Company Ltd by the Military History Section in November 1918. It was part of a group of ship models chosen to represent ships which had been lost or torpedoed during the war.
The Adelaide Steamship Company was happy to donate the model to the future Australian War Memorial, but balked at their request to repaint it in camouflage colours (the painter asked to do the work "was very indignant at the idea of camouflaging such a magnificent model – he stated it would be sacrilege"). As a result of the painter’s intervention, the model was delivered to the Memorial in May 1920 without camouflage. The Memorial instead contracted a local Melbourne painter and decorator (Robert William) to do the work in August.
In August 1926, the Memorial also contacted Captain James Sim, who was in command of 'Warilda' when it was sunk, to indicate where the torpedo hit. They sent him an image of the ship model which he marked up. The ship was then displayed with the torpedo strike point and damage caused indicated on the glass display case. The current (2014) display utilises a light to indicate the torpedo strike point.
The model does not incorporate the April 1917 addition of a 4.5 inch stern gun, and there is no evidence to show this was ever fitted to the model.