Model of a repaired well at Khalassa, Palestine 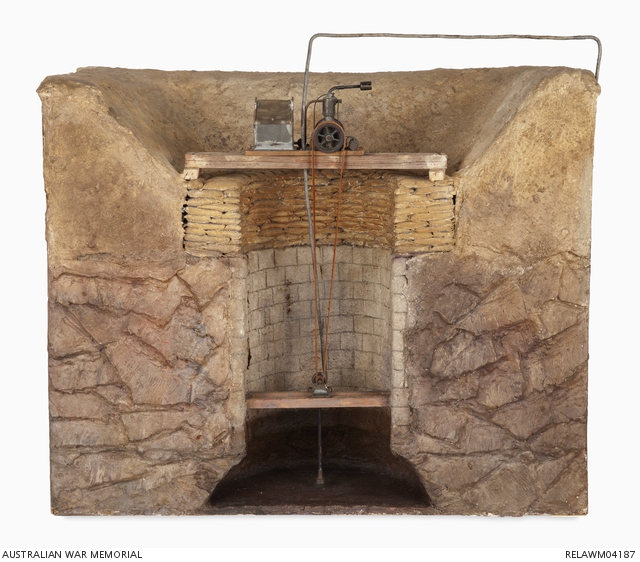 Cross-sectional model showing a bell-shaped water well and pump. The model includes a cross-section of the bedrock as well as the desert sand above. The well sits within a depression and is lined with stone blocks topped with ten or eleven layers of sandbags. Supported on a wooden platform sitting on the sangbags is a petrol engined donkey engine attached by a leather belt to the pulley of a water pump sited in the lower section of the well. This small pump sits on a second wooden platform. An outlet pipe runs vertically from the pump, rising above the depressoin, where is turns a right-angle to an outlet point.

The model is made from painted plaster and wood, with metal compoments used for the pump, engine and piping. The original leather driving belt has been replaced due to the original's fragility.

Sectioned model of a deep well situated at Khalassa, the site of an ancient city in Palestine, some 20 kilometres to the southwest of Beersheba.

The well, and that of nearby Asluj, (to the south), were in late October 1917 found to have their masonry construction "shattered to a considerable depth, and the destroyed wells were found filled with earth and great masses of concrete (Official History Volume VII - Gullet - "Sinai and Palestine", p 378). They had been destroyed by Turkish forces to deny their use to their enemies; the 40,000 gallon (almost 182,000 litres) water storage tank at Khalassa was also destroyed.

They were put back into working order by Australian and New Zealand Engineers using a petrol engine and a centrifugal pump, once the walls had been rebuilt and reinforced. The repaired well at Khalassa was ready to be used by 29 October by members of the light horse regiments prior to their attack on Beersheba. Gullet reports that 'men worked up to their waists in mud and water' to clear and repair the wells. See AWM image J02231 for a view of the well after to its repair, and with the engine running. See image J02836 for repairs being carried out, and a view of the destroyed water tank.