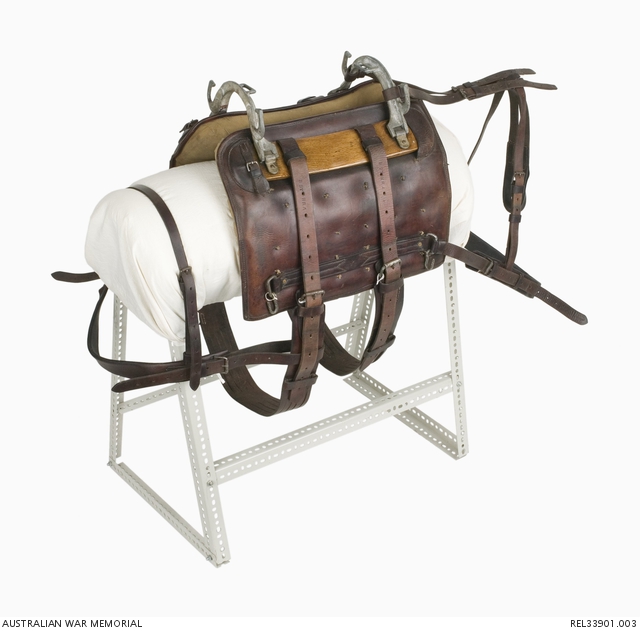 Short split leather girth, one of two for use with the General Service Pack Saddle Mark V. There is a large single steel buckle with a keeper at each end. There are two further keepers at the buckle ends of the girth, on either side of the two spilt sections of leather. Stamped in to the leather between the split sections is 'MULDER D (broad arrow) D and a checker's mark 'R.G.' and a broad arrow.

In 1904 the British Army adopted a new General Service (GS) pack saddle with an adjustable tree, known as the Mark V pack saddle. The main innovation was the adjustable tree created by having the front and back steel arches jointed to the wooden sidebars, which allowed them to turn to adjust to the size of the back of whatever animal carried the saddle, from the largest horse to the smallest donkey, and eliminated the need to manufacture saddles in different sizes. The saddle could be adapted, by the addition of hanging bars, or universal slats, to carry a wide variety of stores, tools and equipment, and also wounded men. The GS pack saddle was used in both world wars by both the British and Australian armies. The use of pack saddles was especially important in the campaign in Palestine during the First World War where wheeled transport was often not an option. Each machine gun carried by light horse units was transported on a pack saddle, and was accompanied by a second pack animal carrying spare ammunition. During the Second World War pack animals were routinely used by patrols, and larger units such as Norforce, in remote areas of northern Australia. The saddle shown here has two separate girths, which crossed under the animal's belly. Most later versions of the saddle used a shorter single girth buckled to a 'V' attachment, which was in turn buckled to the sidebars. Use of the 'V' attachment gave greater strength and stability to the saddle, and decreased 'rocking' of the load.