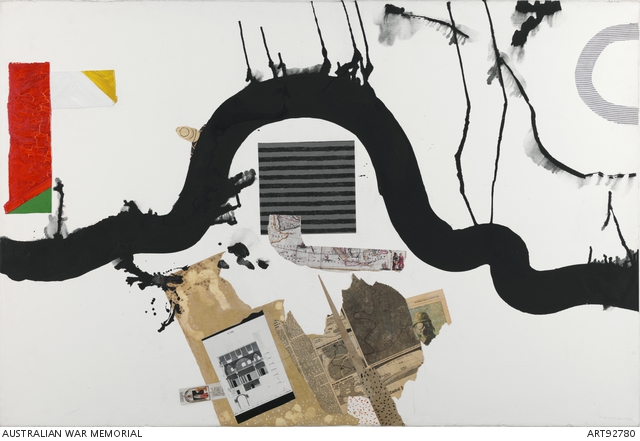 A mixed media work with collage elements related to military satellite photographs of Baghdad during the First Gulf War (1990-1991). The painting reflects Lynn's interest in current affairs, a theme he explored in 1996 when asked to contribute works to an exhibition that explored 'how issues such as identity and humanity are brought into question by war'. A wandering black line in the centre of the work, the road to Baghdad, divides the image, as if it were an abstracted, aerial landscape. A grey semi-circle appears in the upper right of the work. Lynn's paintings often incorporated an array of symbols, including the semicircle, which without the other half to make a circle, suggests imbalance and struggle. The pieces of newspaper attached to the work with the headlines 'Airborne Radar Coverage of Iraqi airspace', 'Intelligence Processing Centres' and 'Area of Radar Coverage', along with an image of a soldier wearing a chemical weapons or gas mask, all relate to the First Gulf War (1990-1991), subsequent continuous bombings of Iraq after 1991 and the use of eavesdropping and 'intelligence gathering' by the United States in Iraq in 1996.The pieces of architectural drawing, a piece of a map of Asia and the Middle East and a small image of a woman engaged in prayer, with Arabic script, all suggest 'symbols for a creative culture floating in a disintegrating world', alluding to a culture being damaged and fragmented as a result of the First Gulf War.