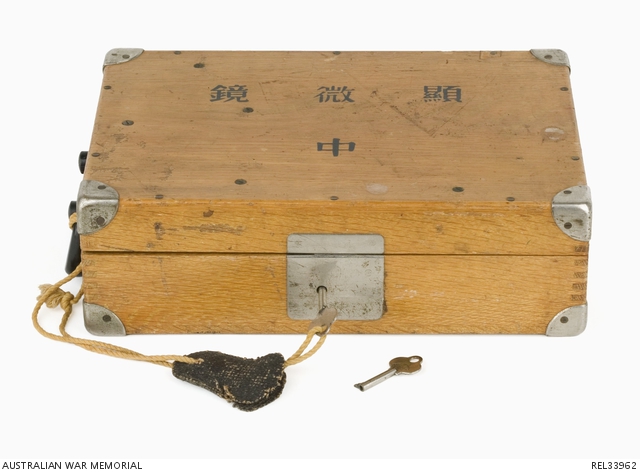 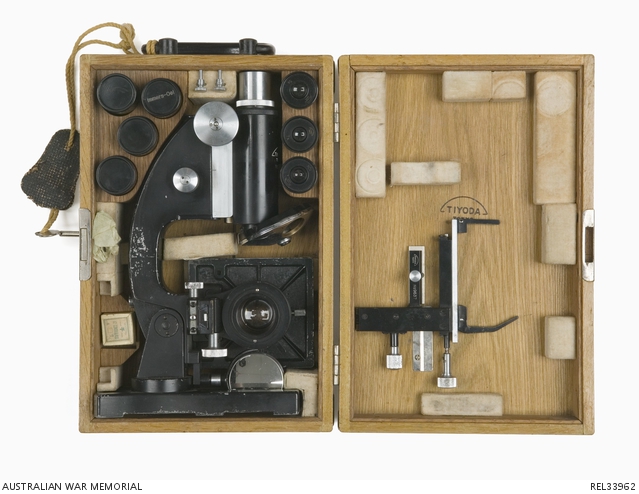 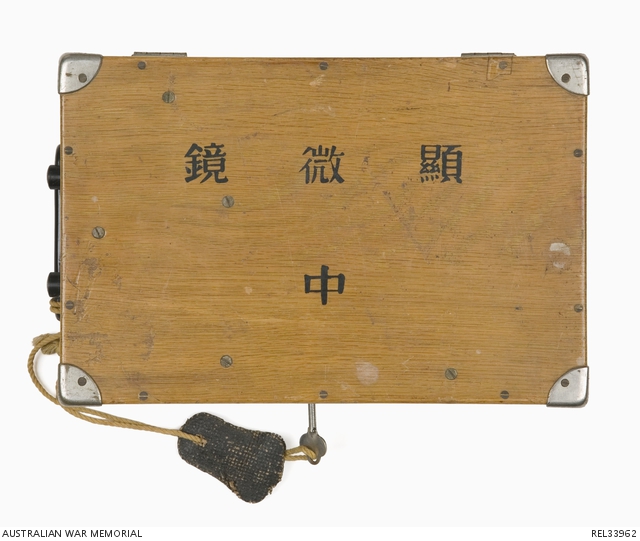 Microscope contained in a wooden case with dovetailed corners. Each corner is reinforced with a metal cap attached with two screws. The lid is made from a single piece of wood while the base is made from two pieces of wood. Both lid and base are screwed to the sides. There is a black painted metal carrying handle on the short upper side of the case to ensure that the enclosed microscope is carried in an upright position. The case has a steel lock and two keys. One key is attached to a length of khaki twine tied to the handle that slides into a protective black painted hessian 'bell'. There is also a second spare key. The inside of the box is fitted with wooden cut outs to hold the microscope and its components securely. All are screwed either to the lid or base of the box for stability, and some are covered with cream cotton velveteen. The outside lid bears four black painted Japanese characters that translate 'Microscope - medium size'. The inside lid is marked in black with the manufacturer's name 'TIYODA TOKYO'. The microscope is a Tiyoda Mk Q, serial 12414, monocular model with folding bipod legs and a stage which can be retracted to the vertical position for storage. It is fitted with coarse & fine focus knobs and a rack and pinion focus barrel with provision for fitting a 5x, 7x or 10x eyepiece (or ocular). Each ocular is stored in the case in a separate wooden socket, padded with velveteen. There are three objective lens which screw into the rotating lens carrier - these are 10/0.30; 40//0.65/017 and HI 90/1.25 - and each is kept in a screwtop bakelite canister, also stored in the case in wooden sockets. A condenser is fitted under the stage and is provided with an iris diaphragm for focussing the light coming from the rotatable mirror, and is fitted with a holder for one of the two glass filters stored separately in the case - one clear, one grey. A separate slide frame with adjustable X and Y axes is stored in the case, as are the two frame clips. The main frame of the microscope can rotate on the leg assembly, providing about 70 degrees of movement. All components are either heavy duty steel or brass. The case is also fitted with a small square inset to store a card box of 12 slide glass covers, of which approximately half are present; and a bakelite canister, marked 'Immers-Oel' which contains a glass ampoule filled with slide immersion oil.

This microscope is associated with the service, in the Australian Army Medical Corps (AAMC), of Captain Malcolm Whyte. Henry Malcolm Whyte was born in India in 1920 and was a medical student in Queensland at the outbreak of the Second World War. He was attached to the 15th Infantry Training Battalion at Chermside between November 1941 and February 1942, with the service number Q102478, before being discharged to complete his medical degree. In July 1944 Whyte was appointed Honorary Captain with the Citizen Military Forces (CMF), AAMC, with the service number Q273086, and in November of that year presented for enlistment at Redbank, Queensland, with the permission of the Medical Coordinating Committee, who then arranged his discharge the following day on the grounds that he was needed to work at Maryborough Hospital. Whyte enlisted again, with permission, in January 1945, lasting two weeks before being discharged to work in a civilian hospital. In May 1945 he again enlisted in the CMF, with the number Q273874, and transferred to the AIF in the same month, being assigned the number QX57647. Whyte served with 115 Military Hospital until June 1945, and then with 2 AAMC training Battalion in Victoria, and the LHQ School of Hygiene and Sanitation in New South Wales until August 1945. His overseas service took place after the end of the war. After an attachment to 1 Australian Paratroop Training Battalion in Richmond, NSW until October 1945, Whyte was sent to 2/2 Casualty Clearing station, attached to 2/31 Battalion, at Balikpapan in the Netherlands east Indies. At the end of 1945 he was posted to 2/6 Field Ambulance, attached to 2/14 Battalion, and sent to the Celebes, where he was responsible for the medical welfare of a large camp of Japanese POWs awaiting repatriation. This microscope was presented to him by some of the prisoners in appreciation of his efforts on their behalf. Whyte returned to Australia in March 1946 and served with 112 and 102 Military Hospitals in Brisbane before his discharge in September 1946. He was immediately placed on the Reserve of Officers (RAAMC), serving in Queensland and New South Wales until December 1962.