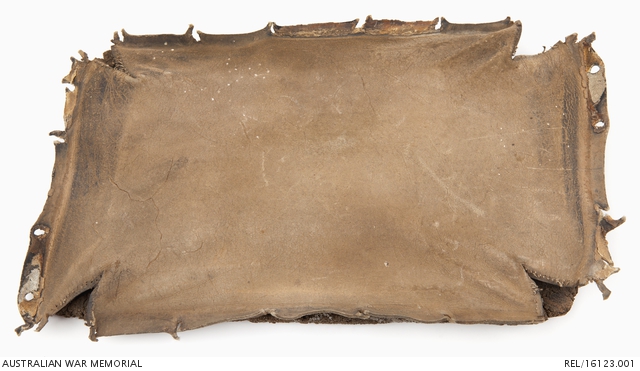 A rectangular piece of partially decayed black foam rubber and a rectangular light brown and black leather upholstery cover for a Frazer Nash FN4A rear gun turret. Each piece has several rivet holes around the edge for securing to the seat bracket inside the turret.

These foam and leather upholstered seats were once part of an FN4A rear turret. These turrets were installed on a variety of Royal Air Force (RAF) aircraft such as the Armstrong Whitworth Whitley, Short Sunderland, Avro Lancaster, Avro Manchester and Short Stirling heavy bombers. Equipped with four .303 calibre (7.7mm) rifle calibre machine guns, these turrets were the primary defensive armanent onboard many Bomber Command aircraft. They were not very well armoured against German machine gun and cannon fire, and kept the gunner exposed to the harsh sub-zero temperatures of high altitude flight. These seats provided some measure of comfort for the rear gunner during his long flights.