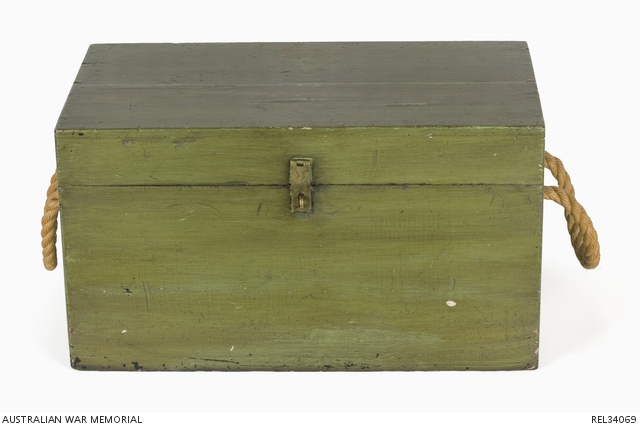 Wooden medical chest, possibly originating from the commando vessel 'Krait' The chest has been painted and stained medium green, one of the many layers of paint applied to the chest post Second World War. An inscription, has been stencilled and painted onto the outside of the opening lid and is still visible under layers of paint. It reads: CAPT. D.A. HEAP AIF. Three metal hinges are attached to the opening lid and is secured by a metal latch, which has provisions for a pad lock. Rope carry handles are attached at each end of the chest for handling.

This wooden chest was received by DX628 Captain Desmond A. Heap, 2nd Armoured Brigade AIF, at Ambon, some time between August 1945 and February 1946. Captain Heap had been serving at Balikpapan during the closing stages of the Second World War, before becoming part of the Allied Forces contingent assigned to accept the Japanese surrender at Ambon. During his time at Ambon Captain Heap went aboard a freighter, which he stated was ‘Krait’ and accepted the ship’s medical chest from one of the ship’s officers. It is possible that this vessel was ‘Krait’ as it was stationed at Ambon at various times between September and October 1945. After the war Captain Heap brought the chest back to Australia, where it was used to store children’s toys and other household items for the next sixty years.
‘Krait’ took part in the notable Allied commando raid on Singapore Harbour in September 1943. ‘Krait’ carried a crew of eleven Australian and four British army and navy personnel close to the occupied Harbour before disembarking a team of six commandoes who entered the port in three two-man canoes. These commandos raided Japanese shipping by attaching limpet mines to the hulls of ships sinking seven in total and destroying 37 000 tonnes of cargo.