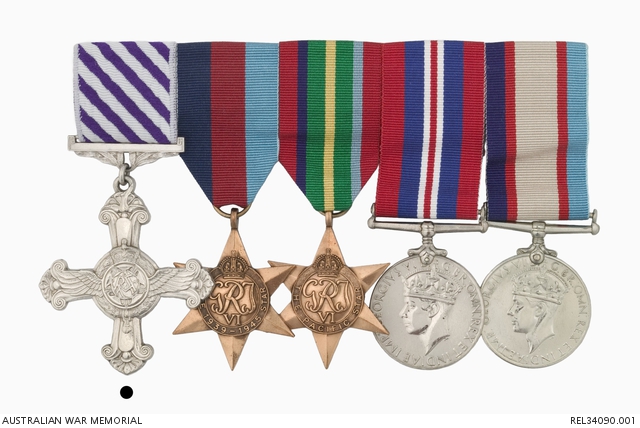 400076 Flight Lieutenant Kenneth Ford Boss-Walker was born in Hobart in 1915 and enlisted in the RAAF on 27 May 1970. After qualifying as a pilot Boss-Walker specialised in photo reconnaissance, flying Wirraway and Buffalo aircraft before converting to P-38 Lockheed Lightning aircraft in 1943. In 1944 he converted to De Havilland Mosquito aircraft, testing and flying the first Mosquito assigned to 1 Photographic Reconnaissance Unit, A52-2, based at Coomalie in the Northern Territory from May 1944. The Unit flew reconnaissance missions over the Japanese controlled Netherlands East Indies and Dutch New Guinea. In June 1944 Boss-Walker and his navigator, Pilot Officer J Love, completed the first operational flight by a Mosquito to Ambon. On 25 June 1944 managed to bring his aircraft back to Australia on a single engine after one engine failed over Surabaya. He was awarded the Distinguished Flying Cross for his skill and courage on this occasion. The citation for the award reads, 'Flying Officer BOSS-WALKER completed his second operational tour with No. 1 Photographic Reconnaissance Unit./ He converted to Lightning aircraft and carried out several very successful operations before being selected for conversion to Mosquito aircraft. He brought the first of the type to the area and carried out the necessary tests in the most capable manner./ During a recent extremely long photo reconnaissance operation over Sourabaya [sic], one engine failed while over the target before the mission had been completed. By extreme courage and expert airmanship in a most desperate situation, he completed the operation, and, although his oil and fuel for his remaining engine were running low and the wireless had failed, he managed to return to base, a distance of over 1,000 statute miles and landed safely./ The photographs brought back were some of the best ever taken of that area and proved of great value to the R.A.A.F./ Flying Officer BOSS-WALKER'S courage, determination and devotion to duty are in the highest traditions of the Service.' In September 1944 1 Photographic Reconnaissance Unit became into 87 Squadron Photo Reconnaissance Squadron RAAF. Ken Boss-Walker was discharged from the RAAF on 27 July 1945.