The 16,700 ton British hospital ship Tjitjalengka. Built for the Java-China-Japan-Lijn line in ... 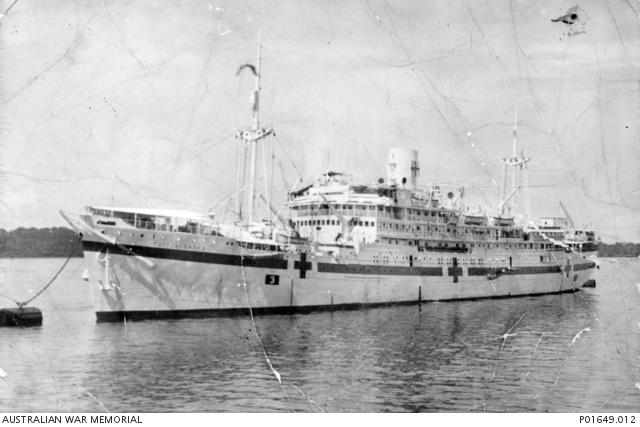 The 16,700 ton British hospital ship Tjitjalengka. Built for the Java-China-Japan-Lijn line in 1939 and owned by a Dutch shipping company, the Tjitjalengka was requisitioned for Admiralty service on 8 July 1942 and was converted in Liverpool, England to accomodate 504 patients. After service in the North Atlantic and Indian Oceans, she was transferred to the British Pacific Fleet. After the Japanese surrender, she carried Allied Prisoners of War (POWs) repatriated from Japan to Australia. On her final voyage, she carried invalids and Naval casualties from Colombo and Durban to Liverpool, England and was then returned to her owners. Among the 7,200 patients admitted to the Tjitjalengka during her career, was Aboriginal serviceman, NX31623 Private (Pte) Frederick Beale, 2/20th Battalion, who was among the group of former POWs on a voyage from Manilla to Australia after being repatriated from Naoetsu Camp in Japan. Note the unusual structure on the bow, which is an A frame to which mine clearing paravanes were attached.