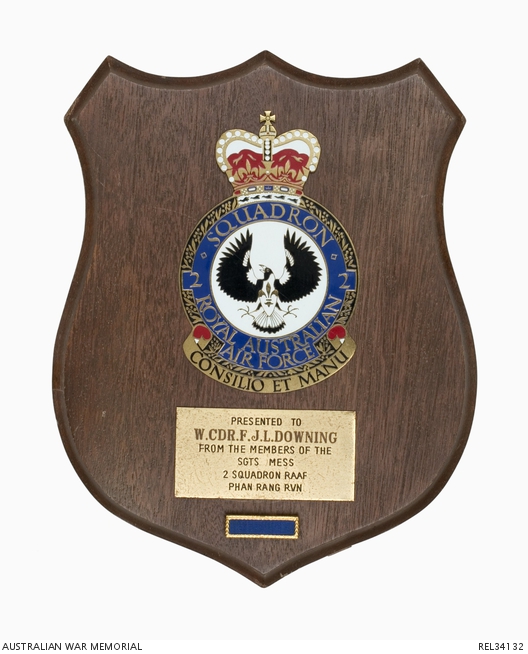 Wooden plaque in the shape of a shield, with three metal attachments fixed to the front face. These attachments are: a metal 2 Squadron unit badge, an engraved rectangular metal plaque and a Presidential Unit Citation Air Force Ribbon Bar. The unit badge features the St Edwards (Queen's) Crown above a white circle, which is surrounded by the words 2 SQUADRON 2 ROYAL AUSTRALIAN AIR FORCE and a ring of wattle. Within the circle is an Australian Piping Shrike displayed with wings outspread and head dexter. The breast of the shrike is charged with the Fleur de Lys. Beneath the badge is a gold scroll with the Squadron’s Latin motto CONSILIO ET MANU (To Advise and to Strike) The engraved plaque reads: PRESENTED TO W.CDR.F.J.L.DOWNING FROM THE MEMBERS OF THE SGTS MESS 2 SQUADRON RAAF PHAN RANG RVN. The Presidential Unit Citation Air Force consists of a gold frame of laurel leaves enclosing and Ultramarine Blue ribbon. On the back of the plaque is a keyhole shaped hole encircled by a small metal disc to enable hanging. A stand has also been cut into the back of the plaque for display purposes. The back of the plaque has been painted white and has been signed by the members of the Sergeants Mess. A list of these signatures is given in the attached document.

This plaque was presented to 34496 Wing Commander (Wg Cdr) Francis John Leonard Downing by members of the Sergeants Mess, 2 Squadron RAAF to mark his premature departure as the Commanding Officer (CO) of the Squadron. Wg Cdr Downing had become CO of 2 Squadron, which was based at Phan Rang Air Base, Republic of Vietnam, on 1 November 1970, taking over from outgoing CO 14165 Wg Cdr Jack Boast. On 14 March 1971 Wg Cdr Downing was flying Canberra Bomber A84-228 with 32334 Flight Lieutenant (Flt Lt) Allen John Pinches when their aircraft was hit by two SA-2. Surface to Air Missiles (SAMs). Downing and Pinches were both able to eject out of the aircraft, which had suffered critical damage but were not rescued until 27 hours later. The two Australian airmen were winched to safety by a US Army rescue helicopter and taken to the hospital at Quang Tri as both had sustained injuries on ejection. Wg Cdr Downing had a fractured kneecap and Flt Lt Pinches fractured vertebrae in the lower back. Later, after being transferred to a hospital at Da Nang and then Vung Tau, the two were flown back to Australia for a protracted convalescence. 14501 Wg Cdr Thomas Hugh Thorpe became the new CO of 2 Squadron on 7 April 1971.