RAAF UH-1B 'Huey' helicopter A2-1022 sits in the ammunition dump at Vung Tau following a crash ... 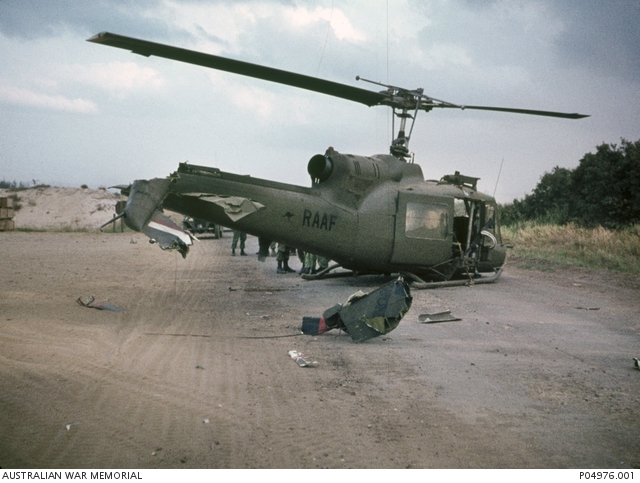 RAAF UH-1B 'Huey' helicopter A2-1022 sits in the ammunition dump at Vung Tau following a crash caused by engine failure shortly after take-off. The engine failure, due to grass being ingested through the engine's air inlets, was one of a spate that occurred around this time: a second helicopter (A2-1019, now in the Memorial's collection) crashed in similar circumstances on 13 April 1967 at Vung Tau, another helicopter crashed in Australia, and A2-1024 crashed on 6 June 1967. This particular helicopter has no tail boom antenna and large M60 ammunition boxes. In 1966 A2-1022 had played a major role in the Battle of Long Tan. On 18 August 1966 A2-1022 and A2-1020 transported Little Pattie and other entertainers from Vung Tau to Nui Dat for a concert and were on standby to fly them back to Vung Tau. During the concert, a battle commenced in a rubber plantation near the Village of Long Tan. Little Pattie was evacuated from Nui Dat in another helicopter. A2-1020 and A2-1022 were tasked to drop ammunition to D Company, 6th Battalion, The Royal Australian Regiment (6RAR) during the battle which was fought against more than 2 000 North Vietnamese and Viet Cong troops. After fighting in torrential rain for four hours, and almost being overrun, they were supported by accurate artillery fire from the nearby Australian task force base, an ammunition resupply by the two Iroquois helicopters, and the arrival of infantry reinforcements carried by Armoured Personnel Carriers. Eighteen Australians were killed and twenty-four wounded as a result of this engagement, which became known as the Battle of Long Tan. The helicopter crew members on A2-1022 during the resupply at Long Tan were, pilots O39642 Flight Lieutenant (Fl Lt) Clifford Mitchell (Cliff) Dohle and O43428 Fl Lt Bruce Ivan Lane, and gunners A32932 Corporal William Rex (Bill) Harrington and A56669 Leading Aircraftman Brian Boyd Hill.