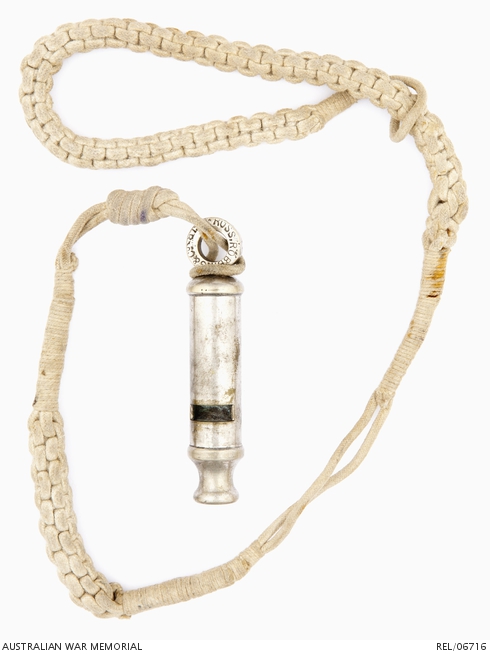 Standard tube-bodied police style general service whistle with lead fipple and intergral suspension loop. The pair of windows are aligned at the same level. One side of the suspension loop is impresed with a broad arrow marking, the other side 'ROSS ROBBINS & CO MELB'. Portions of the plating have worn through, especially along the tube, exposing the underlying brass. A eight-plait white cord lanyard is attached to the loop; it is slightly grubby.

Paterson was initially assigned to the third Reinforcements for 1 Divisional Artillery Column and embarked for Egypt aboard HMAT Hymettus which left Sydney on 8 February 1915. After training in Egypt he landed at Gallipoli on 14 July. Paterson was transferred to 3 Field Artillery Brigade (FAB) on 6 September; he was attached to 8 Battery, Anti Aircraft Section on 16 October. On 6 November he was transferred to 9 Battery. Returning to Egypt after the evacuation from Gallipoli, Paterson was taken on strength of 24 FAB, 110 Battery on 23 March 1916 at Tel-el-Kebir; three days later he was made acting bombardier and on 20 April he was confirmed in the rank of bombardier. He transferred to France with the AIF in June.

On 25 January 1917 Paterson was transferred to 10 FAB and posted to 38 Battery. He was killed in action on 16 April 1917 near Ecoust during the artillery's support for the Battle of Bullecourt and was buried 'at right of road, Ecoust-Vrancourt 57 c.N.W. Square E7 d.9.6' His effects were returned aboard the transport Euripides and delivered to father on 12 December 1917 - among the items were this and a second general service whistle. His body was exhumed in April 1923 and transferred to the H.A.C. British Cemetery at Ecoust St Mein, Plot 3 Row C Grave 30 - 8 kilometres NNE of Bapaume. His grave is engraved 'Remembered with honour'.

Paterson's younger brother Stanley Duncan Paterson enlisted on 3 October 1914 with 3rd Field Company Australian Engineers. He was killed in action at Gallipoli on 19 May 1915, aged 18.

As a corporal in an artillery unit, Paterson would have used his whistle in action as a aid to fire and control during fire missions; this was especially relevant during the noise produced during an artillery barrage.