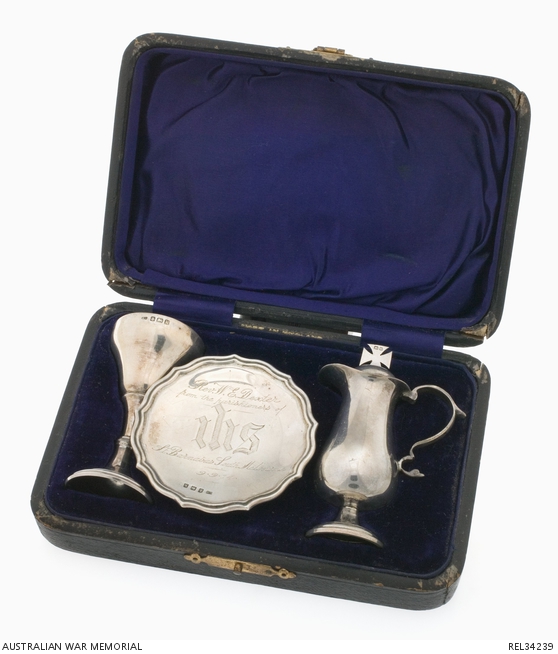 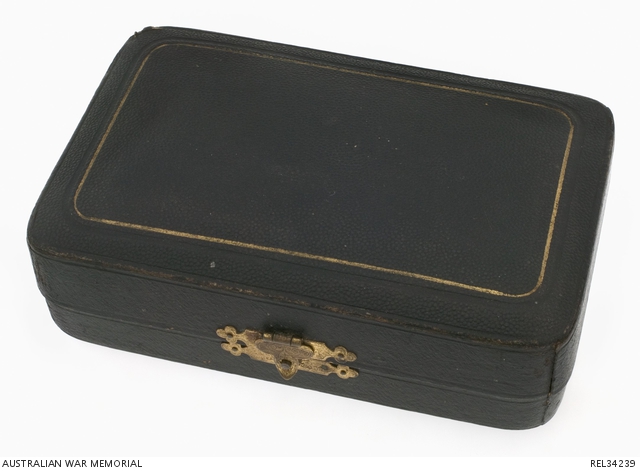 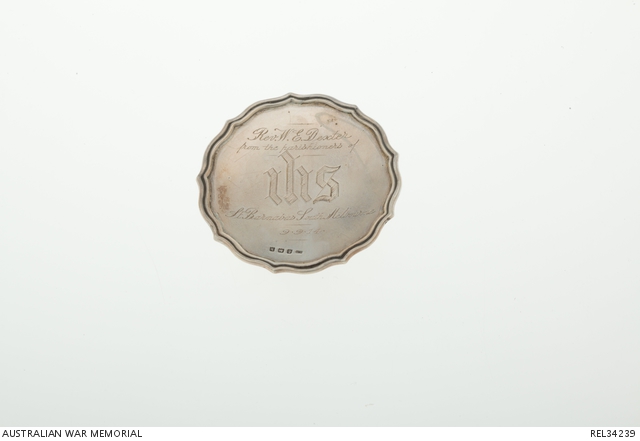 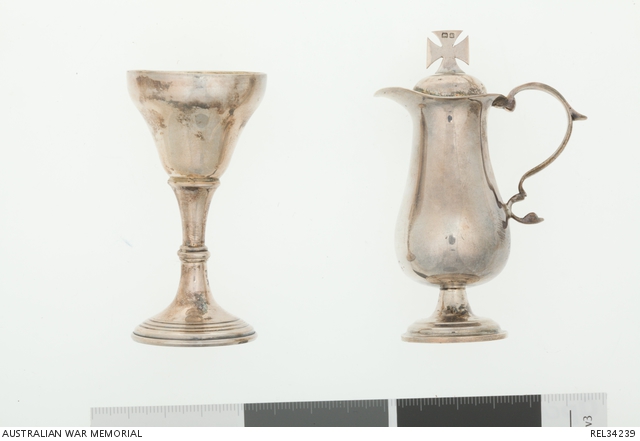 Engraved sterling silver communion set in black leatherette covered wooden presentation case. The case is fitted with a hinged lid and single hinged brass clasp. The interior of the case is covered in purple coloured satin and velvet with three distinct locations for each piece. The communion set consists of a miniature chalice, paten and flagon. The tray is engraved with 'Rev. W. E. Dexter from the parishioners of St Barnabas South Melbourne 9.9.14'. Each part bears the 1909 hallmarks for William Devenport, Birmingham and the Lion passant for English 925 sterling.

Walter Ernest Dexter was born at Birkenhead, Cheshire in England in August 1873. At the age of 14, he became a boy sailor on the barque 'Buckingham', from which he soon deserted and stowed away to New York. Some years later he resumed his nautical career, and by 1899 had passed an examination for the Master's Certificate. Before he had a chance to command his own vessel, he enlisted as a trooper in Lumsden's Horse (a unit raised mostly in India from British troops serving there) in February 1900 for service in the Boer War. Dexter served in South Africa until early 1901, and was awarded the Distinguished Conduct Medal for his courageous actions. No citation for this award is known to exist, but it was probably for the action at Karee when a party of Lumsden's Horse was cut off and had to fight its way out, suffering fifty percent casualties in the process. Later in 1901, Dexter became master of the 'Afghan', and began a period of study at sea which led to his enrolling at Durham University in 1906, with the intention of joining the Anglican ministry. After graduating, he was ordained in 1908 and in 1910 appointed to work as a vicar at Wonthaggi in Victoria and was later transferred to South Melbourne. At the outbreak of war in 1914, Dexter offered his services as a chaplain, becoming one of the first twelve such appointments to the AIF. Initially chaplain to 5 Battalion, and then to the entire 2nd Brigade, Dexter distinguished himself at Gallipoli by his bravery and practicality, as well as his spirituality, and was highly regarded by the troops. He spent considerable time organising the surveying and mapping of the Anzac cemeteries before the evacuation of the area in December 1915, and in early 1916 was awarded the Distinguished Service Order in recognition of his Gallipoli exploits. Later in France, he continued to devote himself to the welfare of the troops, and was awarded the Military Cross in 1918, becoming the most decorated chaplain in the AIF. After the war and what he described as 'all this work amongst men', Dexter had doubts about resuming parish work. For a time he became a soldier-settler at Kilsyth, Victoria. This venture proved unsuccessful, and he soon returned to the church, successively serving the Victorian parishes of Romney, Lara and West Footscray until his retirement in 1947. Walter Dexter died at his home in East Malvern in August 1950.