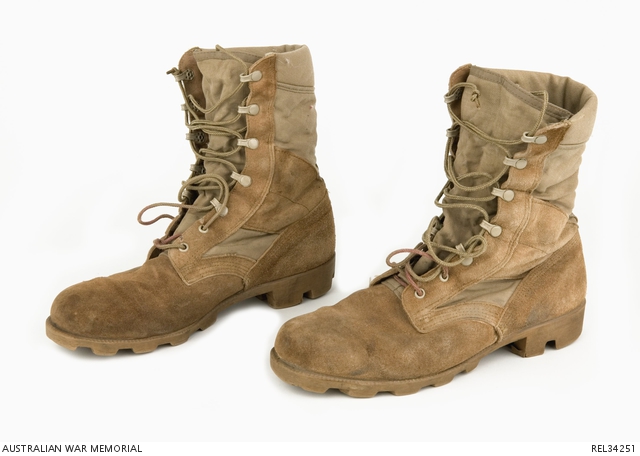 Pair of Canadian pattern army boots acquired in Rwanda by 112956 Lieutenant Colonel (then Major) Craig Norman Burn, Officer Commanding Support Company, Australian Service Contingent 2, United Nations Assistance Mission For Rwanda (UNAMIR), Rwanda. The UNAMIR resulted from the 1994 genocide of almost a million Tutsis and moderate Hutus in Rwanda. After some initial resistance, the Australian government agreed to supply a Medical team and associated support, known as the Australian Medical Support Force (ASMSF), for the 5,500-strong mission. In its largest deployment of medical personnel since the Vietnam War, Australia’s first contingent drew 93 members from over 50 units from all three armed services. They were supported by a further 215 support and service troops. The RAAF flew initial supplies into Kigali airport on 31 July 1994 and an advanced contingent of 74 Australians arrived on 7 August to prepare Kigali Central Hospital, which was badly battle damaged with destroyed facilities and had been the site of a number of massacres; bodies and body parts still littered the corridors and grounds. Once repairs and burials had been completed, the contingent established the only intensive care unit in the country and for a while, also operated the only X-ray department. They were quickly dealing with large numbers of trauma injuries (inevitably caused by machete cuts) and a range of infectious diseases. The second Australian Services Contingent (ASC 2) was deployed to Rwanda in February 1995 and took over the facilities already established by the first contingent. It consisted of over 300 personnel, again drawn from the three services. Both contingents included an Operational Support Company for logistical support and a Rifle Company for protection. Small Treatment Section Groups were deployed to other parts of Rwanda – notably south-west Butare and the massive Kibeho Refugee Camp. Members of the Second Contingent were traumatised by witnessing the April 1995 massacre of over 4,000 (mainly Hutu) refugees by the Tutsi Rwandan Patriotic Army (RPA); there was little they could do, or were allowed to do, except treat casualties in the midst of gunfire and panic. UNAMIR was disbanded in March 1996.