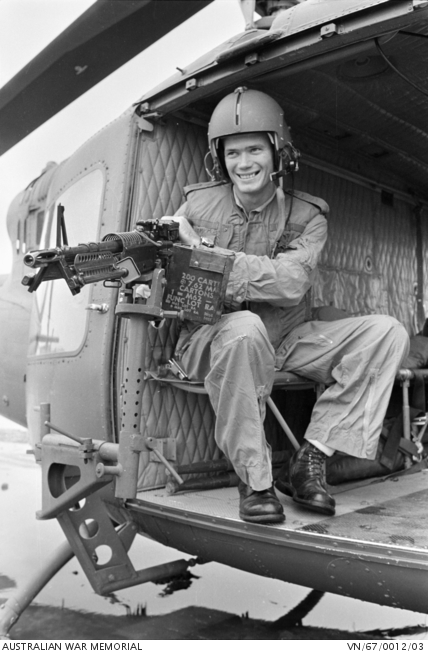 A111550 Leading Aircraftman (LAC) Alan Clarence Bloxsom, of Maryborough, Qld, No 9 Squadron, RAAF, Iroquois helicopter crewman who fought a gun duel with Viet Cong (VC) guerrillas during a daring jungle rescue of Australian soldiers in Phuoc Tuy Province on 18 January 1967, is pictured behind his M60 machine gun, sitting in the helicopter on the landing strip at Vung Tau. During an operation in dense jungle country an Australian soldier was wounded, and the patrol called for helicopter support to evacuate him. LAC Bloxsom was the port door gunner, the helicopter was flown by O312600 Flight Lieutenant (Flt Lt) Kevin John Sharpley, of Sunbury, Vic, and the starboard gunner was A39888 Corporal (Cpl) Victor Edward (Vic) Williams, of East Brighton, Vic. LAC Bloxsom engaged the attacking guerrillas with his M60 machine gun and in the action killed two of the enemy. None of the Australians were wounded in the action. LAC Bloxsom was later killed in action on 31 March 1971, when the helicopter in which he was the door gunner was tricked into an ambush. LAC Bloxsom was fatally wounded and the helicopter was badly damaged by enemy fire.