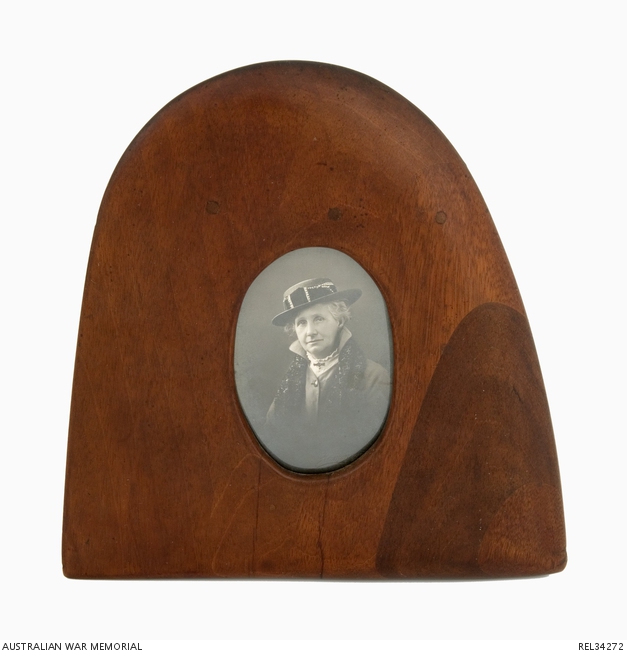 Tip cut from laminated wooden propeller and fashioned into a photograph frame by 750 Private Richard Humphery, 1st Air Mechanic, Australian Flying Corps. The propeller is believed to have been a four-bladed type fitted to an Armstrong Whitworth aircraft most likely an Armstrong Whitworth F.K.3, several of which were used by Australians during flight training. The tip has been modified into a photograph frame by having an oval section cut away from the middle of the tip and a rectangular 3 ply timber cover panel fitted into the back. Attached to the back of the cover panel via sticky tape, are two circular screw-in hooks and a length of picture wire. Marked on reverse side of the tip above the plywood insert is a stamped date which read '?? SEP 1917?' The photograph in the frame is a black and white portrait of Mrs Nellie Humphery. The photograph is inscribed on the back 'Mother at 54 1917' The transparent covering for the picture was made from celluloid sheet taken from access panels in the wings of the aircraft. The rectangular 3 ply panel is stated by the donor to be from the nacelle or pilot's seat. The tip has been finished with French polish by the maker: This tip is one of a pair with REL34271.

This propeller tip was acquired by 750 Air Mechanic First Class Richard Humphery, No. 2 Squadron Australian Flying Corps, after an Armstrong and Whitworth aircraft crashed at Ash France Airfield smashing two blades out of the four-bladed propeller. The crew of two escaped uninjured. Richard Humphery initially enlisted in the 3rd Light Horse Regiment in November 1914 but after serving at Gallipoli he joined on request the Australian Flying Corp in October 1916 and was posted to No. 68 (Aust) Sqn RFC with the rank of Air Mechanic Second Class. Humphery was appointed to the rank of Air Mechanic First Class on 1 August 1917 and proceeded overseas to France on 21 September. He remained on active service in France with No. 68 Sqn RFC (titled No. 2 Sqn AFC from 18 January 1918) until the end of the war. Humphery returned home aboard “Kaiser-i-Hind” on 16 May 1919. He was one of three brothers who enlisted in the AIF during the First World War, the others were: Captain/Chaplain Frederick Humphery and 3007 Louis Morton Humphery.