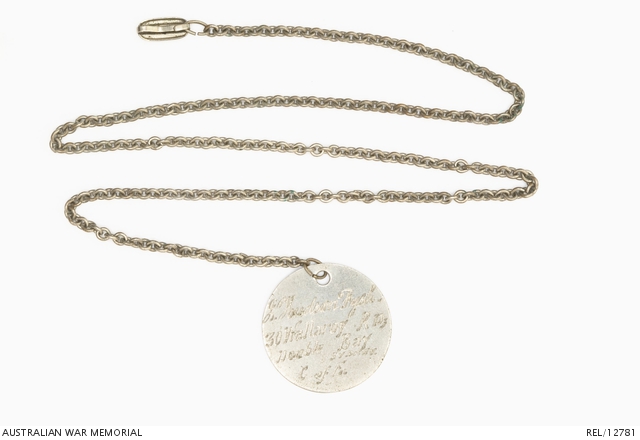 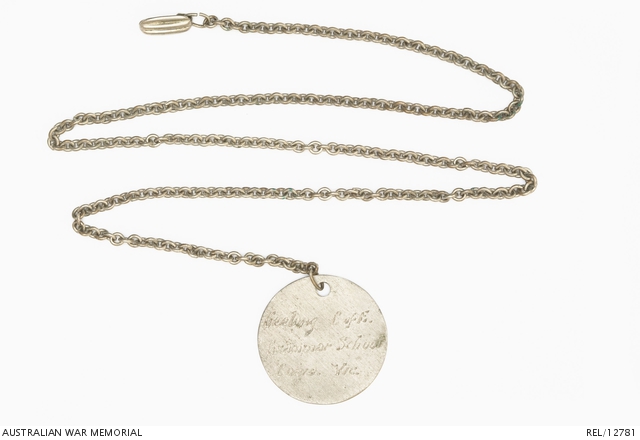 Round stainless steel identity disc mounted on a stainless chain. Obverse is engraved "J. Hudson Fysh. / 30 Wallaroy Rd; / Double Bay / Sydney. / C of E.". Reverse is engraved 'Geelong C of E. / Grammar School / Corio. Vic.' A 3 mm hole has been punched in the top of the disc through which the chain is linked. A snap fastening at the other end of the chain links to the disc end.

First World War veteran and founder of Qantas, Sir Hudson Fysh, had ID discs made for each of his children during the Second World War during the worst of the invasion scare in early 1942. Many Australians shared this fear and had similar identity discs made. This particular example was made for his son, John, who attended Geelong Grammar School and later enlisted with the RAAF on 1 January 1944, just after his 18th birthday, and was assigned the service number 444059. John had trained with Geelong Grammar's Air Training Corps (ATC) squadron. He was discharged on 25 June 1945, aged 19. John says of this disc and the invasion scare that inspired it: "I don't recall my father giving it to me, but I do recall the panic that inspired it. I remember standing on the balcony at my parent's home in Wallaroy Road in Double Bay, thinking about my .22 rifle, and wondering what I'd do if the Japanese came marching up the street. I concluded that I'd probably make my way up to the Blue Mountains and conduct guerrilla warfare. Other residents decided to move away from the coast instead, which inspired my father, who had been at Gallipoli, to dub it (with some distaste) "The Great Retreat". One family bought a couple of acres at Oberon and moved there - others stayed in Sydney but moved to the northern suburbs, such as Wahroonga."