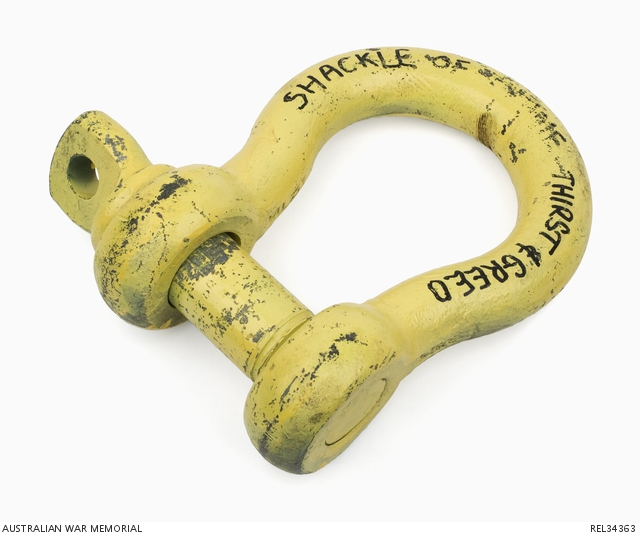 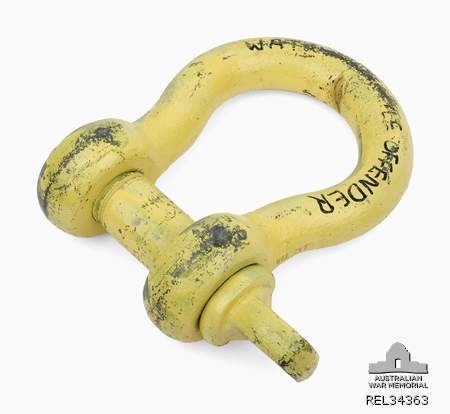 Large yellow painted steel shackle taken from a ship. In some areas the paint has not been properly applied and sections of bare metal are showing. In other sections, the paint has been scraped or worn away. On one side of the shackle 'SHACKLE OF SHAME THIRST AND GREED' has been written in black marker. The word 'SHAME' is partially worn off. On the other side of the shackle is written 'WATER BOTTLE OFFENDER' in black marker. The words 'WATER' and 'BOTTLE' are partially worn off.

Associated with the service of 38 Squadron Royal Australian Air Force in the Solomon Islands during Operation Anode. The yellow shackle was known as the 'Shackle of Shame'. Because the average temperature in the Solomon Islands was in the mid 40 degrees celsius, it was important that personnel always carry bottled water with them. If a member of the squadron was caught without their water they had to carry around the shackle as punishment for 24 hours. Operation Anode is the name of the Australian Defence Force (ADF) contribution to the Australian-led Regional Assistance Mission to the Solomon Islands (RAMSI). RAMSI's assistance is known as Operation Helpem Fren (Pidgin English for 'Helping Friend'). RAMSI is a partnership between the Solomon Islands and contributing countries of the Pacific region. It is a long-term exercise to help restore stability and peace to the Solomons, and to encourage the development of their economy. RAMSI was initially deployed on 24 July 2003, with a mandate approved by the Solomon Islands National Parliament, to help the Solomon Islands Government restore law and order, strengthen government institutions, reduce corruption and revive the economy. Fifteen countries contribute personnel to the mission, which includes police officers, military personnel and civilians.