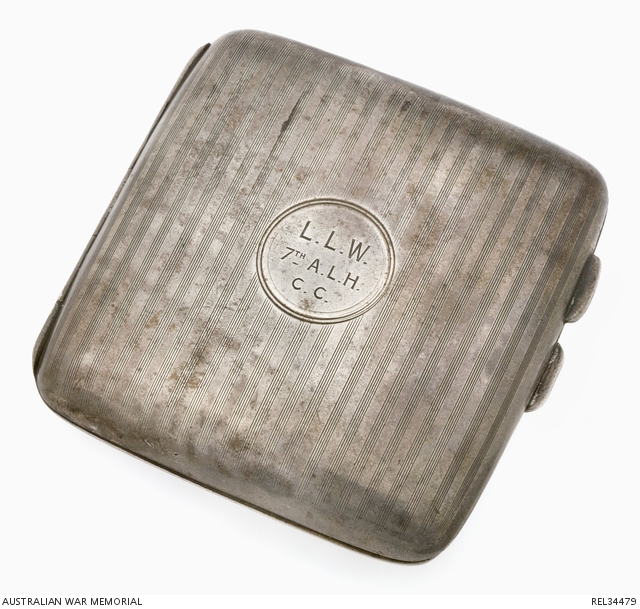 Silver cigarette case. The front has a pin stripe design with a smooth circle in the centre which is engraved 'L.L.W. / 7TH A.L.H. / C.C.'. The pin stripe design is repeated on the curved back. The front and back are joined by a hinge and open with a clasp on the opposing clasp. The interior is gilded. Each half has an internal elastic retaining strap to hold cigarettes in place. Maker's marks are stamped in the interior.

Leonard Lisle Williams was born on 5 December 1893 at St Leonards, New South Wales. He enlisted in the AIF at Rosehill Camp on 13 October 1914, aged 20, and was allocated to C Company, 7th Light Horse Regiment with the service number 506. In November Williams was promoted from trooper to sergeant. He embarked from Sydney on A31 HMAT Ajana on 19 December 1914.

From 1916 the 7th Light Horse Regiment fought in campaigns in Egypt, Sinai and Palestine. Williams received the Military Cross for actions in reconnaissance work around the Beersheba - Gaza road and capturing a prisoner on the night of 31 July/1 August 1917. The recommendation for the award further noted that he showed 'plenty of dash, pluck and initiative and is very cool under fire'. He was also twice Mentioned in Despatches during his service.

In March 1918 Williams was promoted to captain, and a year later was promoted again to temporary major. He was hospitalised a number of times during his service, the longest period being in 1918 when he was diagnosed with malaria in late May, not returning to his unit until the end of July. In December he travelled with the 7th Light Horse Regiment back to Gallipoli for garrison duties, until the unit returned to Egypt in late January 1919. Williams embarked for Australia on 28 June 1919, and his appointment in the AIF was terminated on 3 October.

He enlisted again, in the Second World War, on 10 April 194,2 aged 48. N386511 Major Williams served for three years in Australia as a member of the Volunteer Defence Corps (VDC). When he was discharged on 25 September 1945, he was serving with the 17th Battalion, VDC.