Aerial view of part of the dock and hangars used by 10 Squadron RAAF while operating with RAF ... 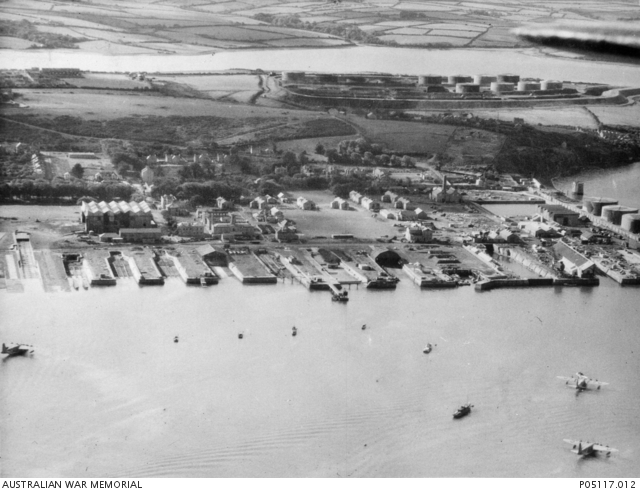 Aerial view of part of the dock and hangars used by 10 Squadron RAAF while operating with RAF Coastal Command at Pembroke Dock, Wales, United Kingdom. Three Short Sunderland flying boats can be seen anchored on the water. The town of Pembroke Dock in the south of Wales was originally established as a Royal Navy (RN) shipyard in 1814. In 1930 the Royal Air Force (RAF) established a flying boat base there, using many of the facilities of the old dockyard that had been closed in 1926. During the Second World War ten separate Coastal Command squadrons including 10 and 461 Squadrons RAAF, operated from Pembroke Dock for varying periods. At the peak of operations there, Pembroke Dock was the largest flying boat base in the world and was home to 100 aircraft and 1000 personnel. Aircraft operating from Pembroke Dock were predominately employed on patrols over the south-western Atlantic approaches to the United Kingdom. Both the town and dock facilities were subjected to numerous German bombing raids, particularly during 1940, and over 200 houses were destroyed. The RAF closed the flying boat base in 1959.