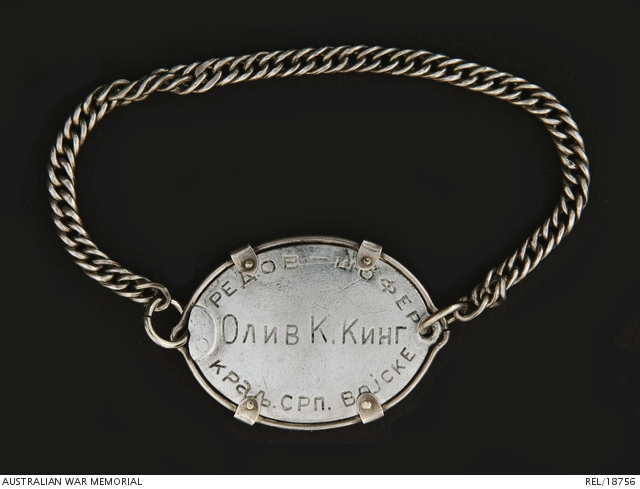 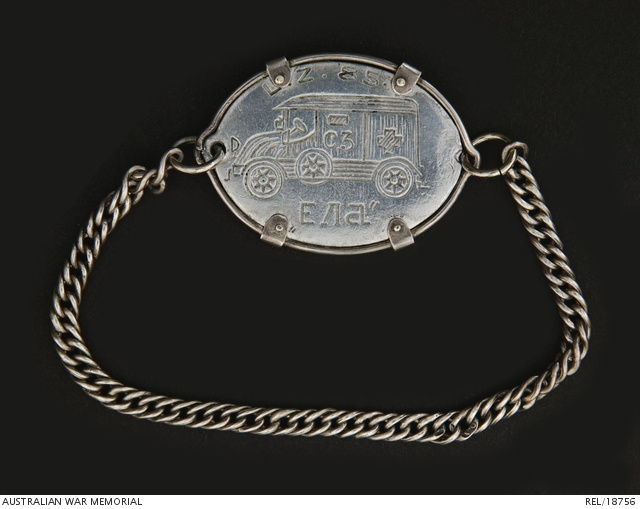 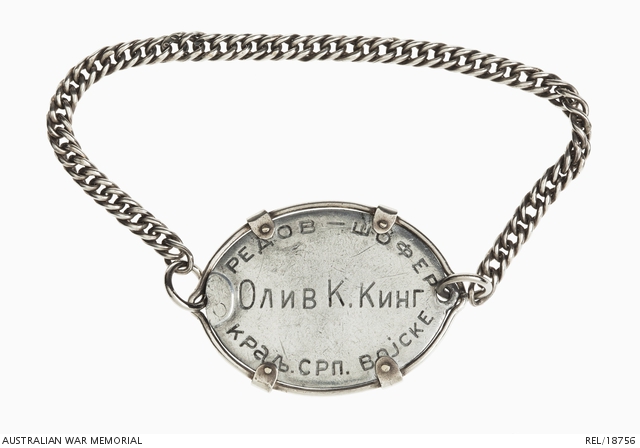 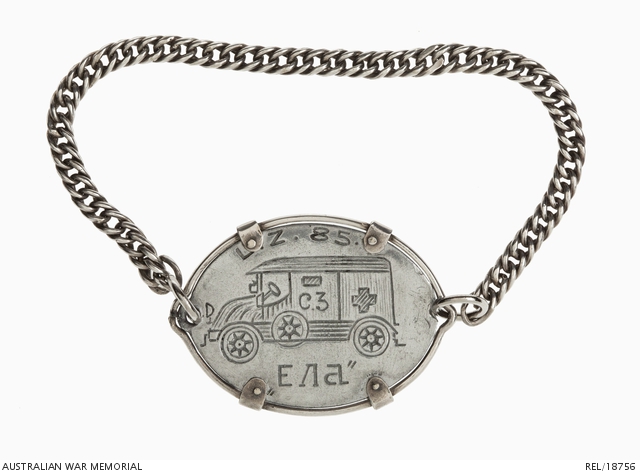 Custom made silver and aluminium identity disc bracelet. Oval aluminium disc is engraved on obverse with Olive May (Kelso) King's details, in Serbian, and on reverse with an engraved representation of her Field Ambulance, with the name 'Ella' in Serbian underneath and her unit above. The disc has been attached to a thin silver frame and attached to a silver bracelet.

Worn by Sergeant Olive May (Kelso) King during her service as an ambulance driver with the Serbian Army from 1916 to 1918. King was born in Croydon, Sydney, NSW on 30 June 1885, daughter of Sir George Kelso and Irene Isabella King. An adventurous and strong-willed woman, she was already an accomplished mountaineer, traveller and motor mechanic with a flair for languages when, in her late 20s, she visited her sister in England, just as the First World War started. Her response, in early 1915, was to join the Allied Field Ambulance Corps as a driver. She purchased a 3 litre French Alda lorry which she had converted into an ambulance capable of seating 16 patients. She christened it ‘Ella' (short for ‘elephant') the nickname referring to the effect the heavy ambulance bodywork had on slowing the Alda from its usual 40 mph to a lumbering 30. An engraving of this vehicle appears on the reverse of King's Serbian identity bracelet. She travelled to Belgium where she was temporarily held by the authorities, suspected of being a spy and consequently abandoned by the Ambulance Corps, which also took her ambulance. She was quickly released just ahead of the advancing German Army. Returning to England and recovering ‘Ella', King joined the Scottish Women's Hospital (SWH) in May 1915. In October 1915 the unit sailed to Salonika, in Macedonia, aboard the SS Mossoul. Their role in the Balkans was to provide medical assistance to the Serbs in their fight against the Austro-Hungarians, Germans and Bulgarians. King quickly picked up the Serbian language and proved herself brave in the face of Bulgarian fire when evacuating patients at Guevgueli, from which she only just managed to escape. The allies retreated to Salonika, where the SWH established a tent hospital. King remained here for the next two and a half years, even after the SWH had left the country. She resigned from this organisation in mid 1916 and enlisted in the Serbian Army as a driver. She was attached to the Headquarters of the Medical Service and eventually rose to the rank of sergeant. She had managed to retain ‘Ella', despite its broken springs and mechanical problems (many of which she repaired herself) and it was one of only three ambulances available to the Medical Headquarters unit, thus earning the numberplate C3. Towards the end of 1916, Olive May (Kelso) King contracted malaria and one of her most frequent visitors was Captain Milan ‘Yovi' Yovitchitch, the Serbian Liaison Officer with the British Army in Salonika. They fell in love and saw each other every day until October 1917, when he was posted to London. Yovitchitch gave her a sterling silver cigarette case as a memento of their affair, which had been the subject of gossip around Salonika. King wrote to her father and sister frequently (see ‘One Woman at War' edited by Hazel King) and clearly enjoyed her job despite the danger and horror she witnessed. She frequently travelled to the front, transporting men and recovering wounded. Her tireless efforts in evacuating civilians and medical stores during the burning of the mainly wooden town of Salonika in August 1917 earned her the Serbian Silver Medal for Bravery. In 1918 her committed work for the Serbians earned her the Gold Medal for Zealous Conduct. Before the war's end, supported by over 10 000 pounds raised by her father in Sydney, she had established a string of Australian Serbian Canteens to help displaced Serbian families and soldiers. For this work King Alexander presented her with the Samaritan Cross and the Cross of the Order of St Sava. Back home after the war in 1923, Olive put her energy into the Girl Guides Association, becoming State Secretary and later Assistant State Commissioner (1932-42). She tried to enlist as a driver during the Second World War but was deemed too old. Instead she worked at the de Havilland Aircraft factory at Mascot between 1942 and 1944 as a quality examiner. Olive May (Kelso) King died in 1958.