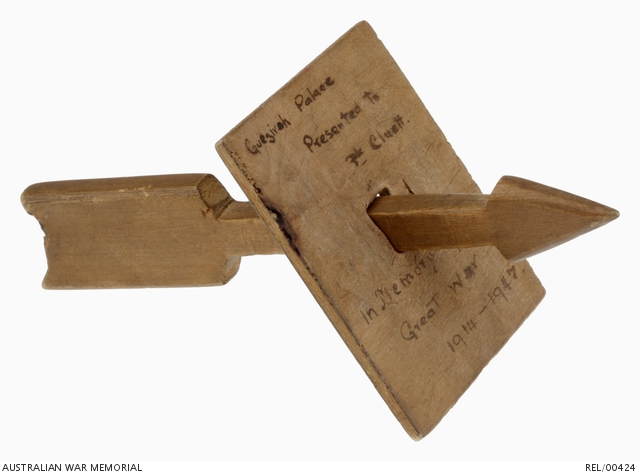 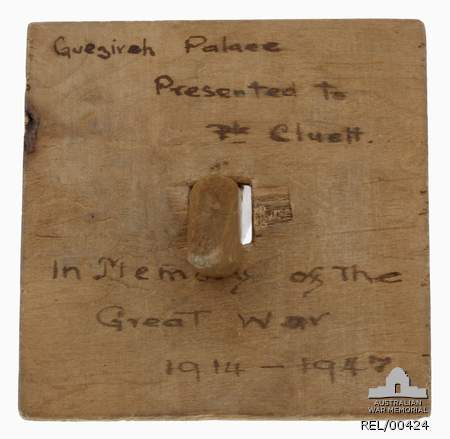 Hand carved and finished wooden trick puzzle featuring a wooden arrow slotting into a wooden plywood square. The square is marked in black ink 'Guezirah [sic] Palace Presented to Pte Cluett'. It is also marked in a different hand 'In Memory of the Great War 1914 - (illegible)'.

Associated with 147 Sapper Frank Roper Cluett, a 21 year old blacksmith from Sydney, who enlisted in the AIF on 20 August 1914 and was assigned to 1 Field Company Engineers. He left Australia aboard the transport HMAT Afric on 8 October and trained in Egypt until his unit was sent to Gallipoli in 1915. Cluett received a gunshot wound to his back on 3 May 1915 while serving on Gallipoli. Evacuated to 2 Australian General Hospital (AGH) at Gezira in Egypt, Cluett was listed as dangerously ill at the end of August. In October he was assessed as 'still seriously ill', suffering from myelitis, an inflammation of the spinal cord.

He was returned to Australia on 20 October 1915 for further medical treatment at 4AGH at Randwick in Sydney and discharged from the army on 14 November 1916. He appears to have undergone several more lengthy stays at 4AGH and was one of the long term patients visited regularly by Mrs J A Little, to whom he gave this puzzle. The puzzle was originally supplied to Cluett for occupational therapy, while he was hospitalised in Egypt. Mrs Little was a local Sydney resident who visited 'her boys' at the hospital twice a day. Information later supplied by her daughter regarding Cluett suggests that his wound had entailed the loss of two inches of his coccyx (tail bone). The resulting inflamation took a number of years to resolve, although it seems that he was never paralysed. Frank Cluett recovered sufficiently to marry Mabel Boniface at Gosford, NSW in 1920. He died in 1940.