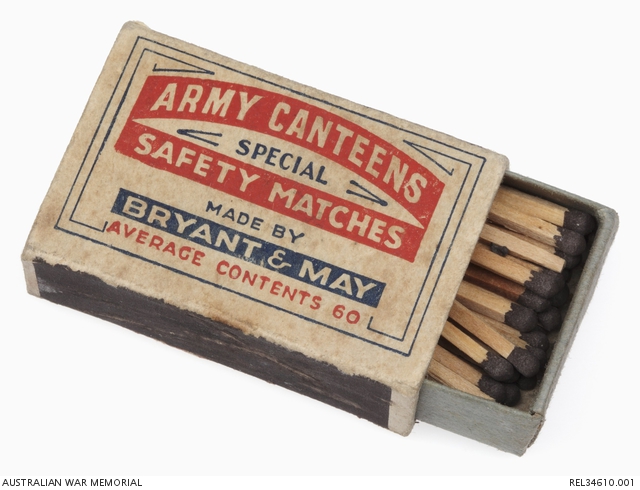 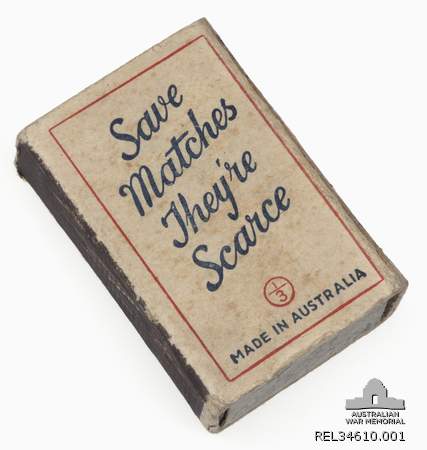 Rectangular wooden matchbox with card inner tray containing approximately 30 safety matches. The box is titled 'Army Canteens Special Safety Matches Made by Bryant & May Average contents 50'. The reverse is titled 'Save Matches They're Scarce. Made in Australia'.

One of two Bryant and May 'Army Canteen' match boxes owned by NX93116 Sergeant James John Samuels, a school teacher of Dubbo, NSW, born 4 August 1911, who enlisted on 20 March 1942 at Paddington, Sydney. Samuels was accepted despite extreme short-sightedness (minus 5 diopters, according to his daughter), and was posted to the Australian Army Service Corps Training Department (Education), based at Sydney.

By March 1943 he had risen to the rank of Warrant Officer Class 2 but on 12 October 1943 he applied for a transfer to the medical services and was posted to 112 Convalescent Depot, reverting to the rank of Sergeant at his own request. He moved with the unit to Lae in New Guinea on the transport 'Duntroon', arriving on 3 March 1944. Samuels contracted dengue fever on 12 December 1944, was admitted to 2/7 Australian General Hospital (AGH) - ultimately he was evacuated to Australia, again aboard the Duntroon, for treatment and recovery. He had returned to service on light duties by May and on 29 August was transferred to 2/5 AGH.

Sergeant Samuels returned to active service shortly afterwards, flying to Morotai from Cairns on 17 September, and marching into 2/1 Convalescent Depot the next day. He was transferred to 1 Advanced Reinforcement Depot (Timforce) on 31October and finally moved to 2/9 AGH on 8 November 1945. He remained with this unit until 4 February 1946 when he emplaned from Morotai for Sydney via Townsville. After a short period of leave, was transferred to the Australia Army Education Services, NSW on 14 March and was detached to 2/11 AGH four days later. Here, Samuels was involved in running the immediate postwar education programmes preparing discharged troops with the knowledge and skills needed for re-entry into civilian life. Samuels was finally discharged from service on 24 July 1946 at Sydney. He had completed a BA by 1950 and married in 1951. James Samuels died on 23 January 1986.