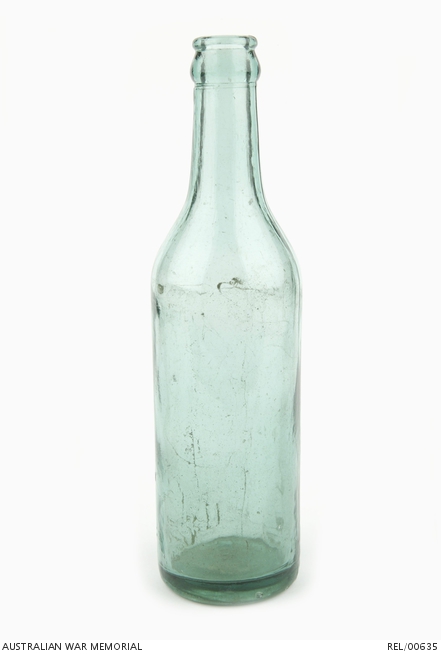 Bottle made of pale green glass, with a series of raised Japanese characters around the base.

Empty lemonade bottle recovered from one of the midget submarines which attacked Sydney Harbour on the night of 31 May - 1 June 1942. The submarines of Lieutenant Kenshi Chuman and Lieutenant Keiu Matsuo were both destroyed within the harbour, while that of Lieutenant Katsuhisa Ban was not recovered by its Japanese 'mother' submarine I-24, and was later found in 2006 off Sydney. Since it is believed that none of the food on board Chuman's midget had been touched when the vessel was salvaged, it is probable that this bottle came from the 'M-22', crewed by Lieutenant Matsuo and his navigator Petty Officer Masao Tsuzuku, who committed suicide after their craft was disabled by depth charges in Taylor's Bay.