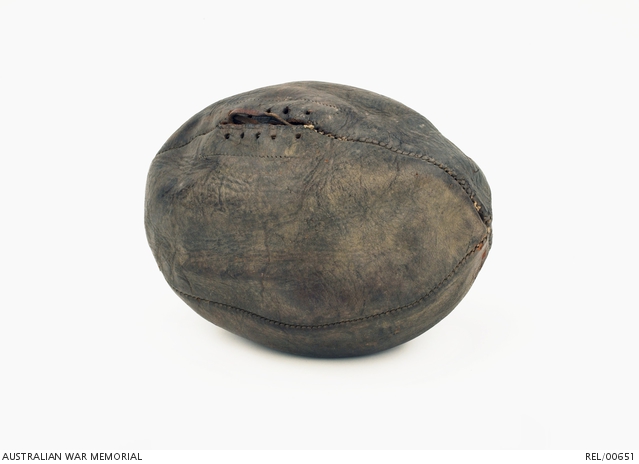 Leather Rugby football without bladder. The ball is made from four similar pieces of brown leather stitched together, the seams quartering the surface. At the centre of the top seam is a reinforced bladder opening, which is closed by a five pairs of lace holes with a length of leather thong as a lace. The thong is knotted through the first lace hole, but is otherwise loose. Inside the top opening is a piece of leather with a circular opening through which the valve of the bladder would have emerged.

Leather cover of a Rugby football used by Australian troops in matches played before either the first or second battle of Gaza in 1917. The ball was retained by 2742 Sergeant Basil Lanser, who is said to have served with both 1 Australian Light Horse Regiment and the Australian Provost Corps in the Middle East. Lanser, who was born in the United Kingdom, spent some years in Australia before and after the First World War, but eventually returned to the UK, where he died in the 1930s.