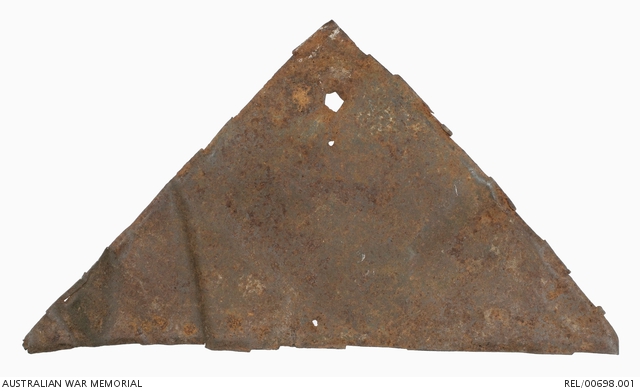 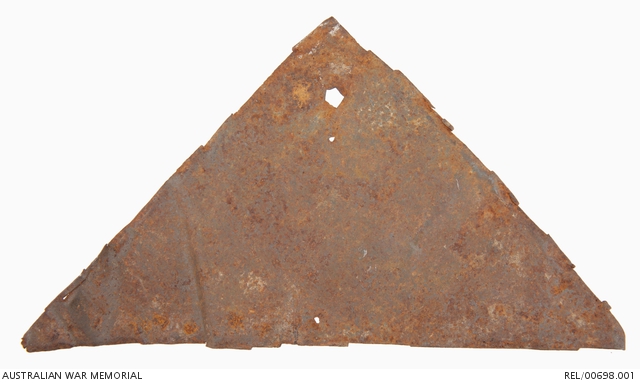 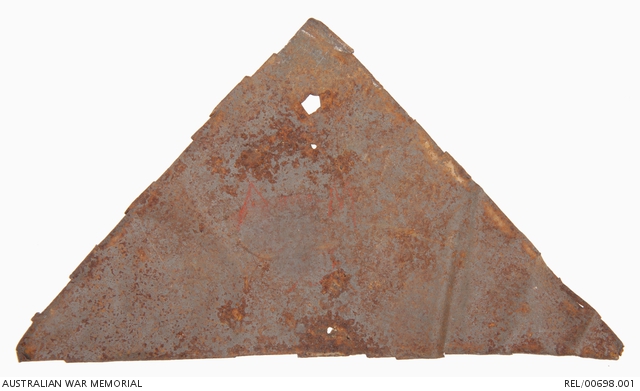 Roughly cut piece of triangular tin. There is a hole at the apex of the triangle, with a smaller one underneath. At the bottom of the triangle is another small hole. These were used to attach the piece of tin to the soldier's uniform.

After the attacks of 7 to 8 August, the New Zealanders held a precarious position on the reverse slope of the ridge at Chunuk Bair. Major General Alexander Godley made plans for another attack on 9 August to capture the crest of the main ridge between Chunuk Bair and Hill Q. On the left, the 39th and Indian Brigades, under Major General H Vaughn Cox, were to attempt the capture of Hill Q. On the right, the New Zealanders, Under Brigadier General Francis Johnston were to assault the southern shoulder of Chunuk Bair and extend their line towards Battleship Hill.

The centre of the attack, upon the summit and northern shoulder of Chunuk Bair, was to be made by the 38th Brigade, under Brigadier General Anthony Hugh Baldwin. Baldwin's force was made up from a number of brigades. It included his 6th East Lancashires, the 5th Wiltshires (from the 40th Brigade), the 10th Hampshires and the 6th Royal Irish Rifles (both from the 29th Brigade). Another battalion, from the 38th Brigade, the 6th Loyal North Lancashires was also initially part of this force, but was instead used to reinforce Johnston's troops overnight. They were accompanied by Brigadier General R J Cooper and the headquarters of the 29th Brigade.

Members of the 38th Brigade wore these metal triangular plates sewn to the backs of their uniforms to assist in identification. Other units wore white armbands, with, or instead of, white squares sewn on their backs.

At a meeting on 8 August, Baldwin was advised by Johnston to reach his jumping off point via the Aghyl Dere, advancing to Chunuk Bair from The Farm. General Godley had earlier expressed an opinion that Baldwin's men should form up near the Pinnacle, make for the highest point of Chunuk Bair, and then swing left in the direction of Hill Q.

Despite planning to attend the meeting, neither Godley, nor any of his staff officers were present, and Baldwin decided the route. He took Johnston's advice, as he was more familiar with the area, but there had been no time to reconnoitre the route. However, Johnston sent along guides who knew the way. Unfortunately their selected route proved to be was clogged with the wounded trying to get to the beach and they became separated, causing long halts and delays.

The Brigade struck off from the main track, and came across a precipice, which there was no way around. The guides admitted they were lost, and Baldwin was forced to retrace their steps about a mile, to where he knew there was a route to the Aghyl Dere. However this route was also congested and the brigade was behind schedule.

The attack was to occur at 5.15am, as soon as the bombardment lifted. The units to the left and right had been told not to move until Baldwin's troops came into the line. Only the 2/10th Ghurkas and the 6th South Lancastrians attempted an advance, as they had not received the order to wait for Baldwin's forces.

At 6am, the leading battalion of Baldwin's force reached The Farm and attempted to advance. The brigade suffered many casualties, so Baldwin decided to withdraw to the edge of The Farm plateau and dig in.

The next morning, the Turks counter attacked, capturing the Pinnacle, before machine gun fire from the Apex halted their advance. More Turkish troops advanced from Chunuk Bair to The Farm. The British suffered heavy casualties. Baldwin was killed in the fighting, and Cooper severely wounded in the chest.

The British retreated, although The Farm was briefly reoccupied, but as the Aghyl Dere was under the view of the Turks at the Pinnacle, the position was isolated. The British remained until dusk, during which time the wounded were recovered, before withdrawing. A few days later, the Turks reoccupied The Farm.

In 1919, the unburied remains of those who died were found where they fell, scattered in their hundreds around the ridges, by the Australian Historical Mission. Fragments of uniforms and possessions were also found, including this piece of metal from a British uniform.