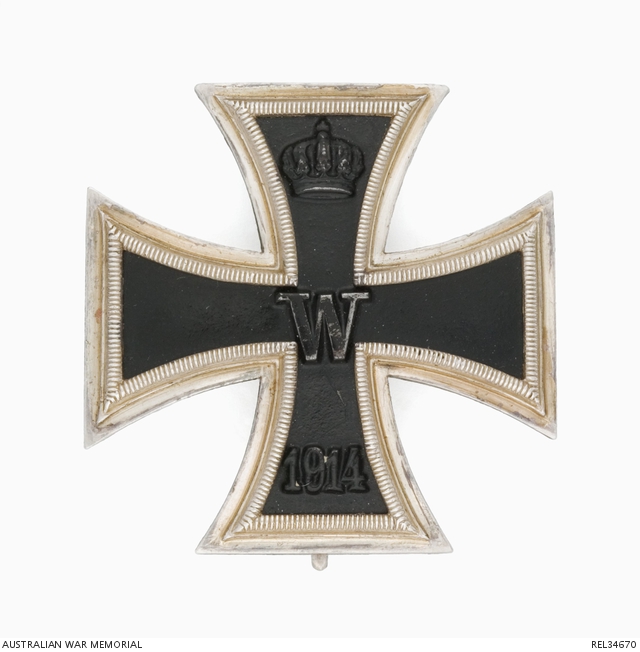 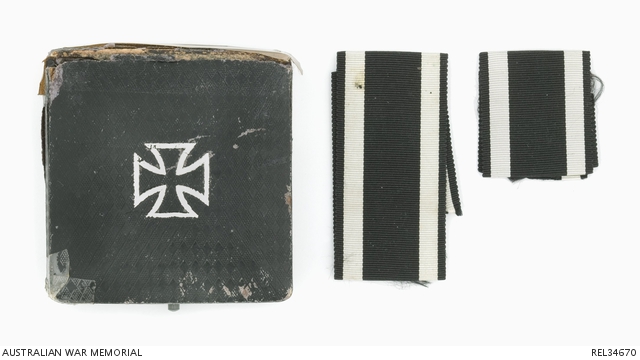 First Class version of the award, slightly obverse, with plain silver back, fitted with pin and claw fittings. Still stored in the original issuing jeweller's box with impressed silver depiction of the Iron Cross on the lid, and two loose lengths of 30 mm wide unwatered ribbon. The lid has parted from the body of the box.

Medal associated with the service of Leutnant Doktor Kurt Phillip Rudolf Ehrenberg, born 31 January 1893, who served with the German Army in France in the First World War, commanding an artillery sound ranging company, or Schallmesstrupp.

A member of an academic family whose ancestors include Martin Luther, Ehrenberg was an architect based in Berlin who wrote an architectural history of the city of Karlsruhe (where the family moved in 1931) and designed two kilometres worth of wine cellars for one of the Czarist princes in the Crimea.

Ehrenberg married a Jewish woman after the war and had a daughter and a son, Rudolf, who was born on 14 August 1921. Rudolf attended the Bismark Gymnasium in Karlsruhe from 1931 until 1936, but soon after the family moved there, they began to feel the growing effects of anti-Semitism. One day Rudolf's German language teacher arrived for lessons clad in full SS uniform; his mfather's car was requisitioned by the SA and Kurt's brother (also named Rudolf), Professor of Biology at the University of Gottingen, was stripped of his post and sent to serve with the Labour Corps. As a result Kurt Ehrenberg decided to get his family out of Germany. His daughter married and emigrated to the United States and his son Rudolf was sent to stay with his uncle, Max Born in Edinburgh (Born later won the 1954 Noble Prize in Physics and had devoted much time in 1915 and 1916 as a member of the German Army developing the theory of sound ranging).

Kurt Ehrenbereg and his wife only managed to escape two weeks before war was declared in 1939. Kurt eventually emigrated to Australia with his son and his son's family.