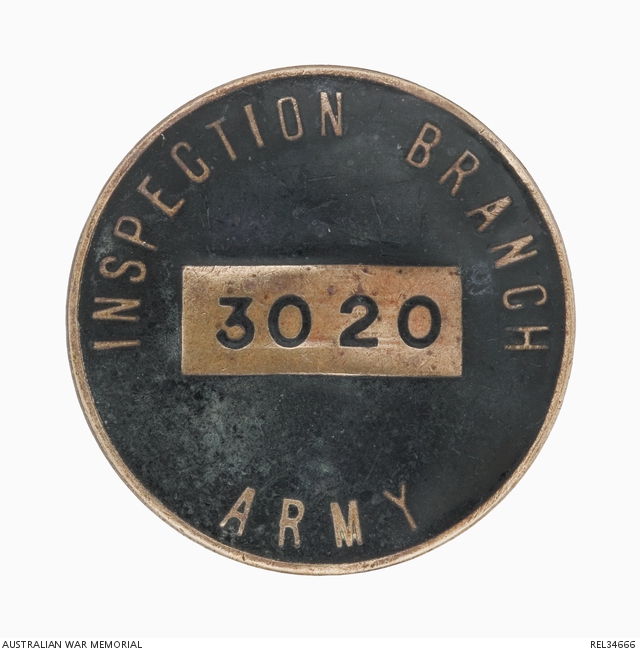 Round brass and enamel badge. The obverse is enamelled black with the words 'INSPECTION BRANCH / ARMY' around the circumference, and a central rectangular plain brass panel stamped with the number '3020'. The numbers have been enamelled. The words 'ISSUED BY / DEPARTMENT / OF THE / ARMY / NOT TRANSFERRABLE'. are cast into the reverse, which is fitted with a brass clasp pin fitting.

Army Clothing Inspector's badge issued to Frederick Raymond Kerr, born Winton, Queensland; a grazier from Inverell, NSW who had served with 12 Light Horse Regiment during the First World War. He saw action in the Middle East and and was seconded to 4 LHR in February 1917 to attend a Hotchkiss machine gun course at Moascar, rejoining his unit two weeks later. During the Es Salt raid in the Jordon Valley on 20 April 1918, Private Kerr was shot in the chest. His service record reveals that his wound kept him in and out of rest camps until early 1919, when he was taken off strength from 12 LHR with ‘debility’ on 9 February, with the rank of Lance Corporal. Fred Kerr returned to Australia aboard the Euripides, disembarking at Sydney on 20 April 1919. He settled in Tulley, Qld. His daughter relates that he was in Townsville on the night of the first Japanese bombing raid there (25-26 July 1942) where the sudden shock triggered a stroke. The family moved to Ashgrove, Brisbane and after recovery, Fred volunteered for service with the State Emergency Service, acting as a Air Raid Precaution (ARP) Warden for Ashgrove. He was additionally employed as an Inspector for the Department of the Army Inspection Branch, regularly visiting and checking the quality of military clothing at Brisbane and district clothing factories. He wore this badge when acting in this capacity.