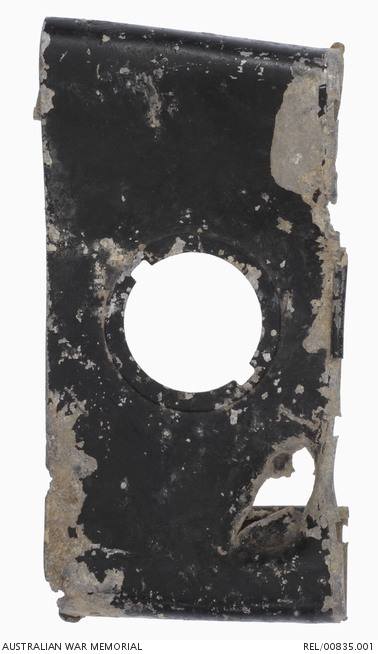 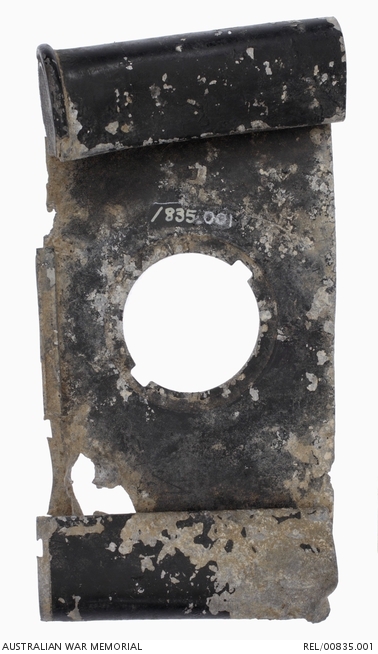 Remains of the back outer casing of a Kodak vest pocket camera. The bellows lens and most of the side pieces are missing. Some of the black enamel finish has chipped off the casing, and there is a bullet or shrapnel hole at one end. There is a hole in the centre, where the pressed steel disk (with an oval shaped, amber viewing window) would have been located. The curved upper and lower edges are misshapen.

This piece of a camera was found in January 1919 at Dead Man's Ridge by Lieutenant William Hopkin James, who was leading a small party from the Australian War Records Section at Gallipoli, taking photographs and collecting items for the national collection.

Dead Man's Ridge was a position between the Bloody Angle and Pope's Hill in the ANZAC sector. It was named for the dead of the British Royal Marine Light Infantry's Portsmouth Battalion, who were killed there on 3 May 1915. Three attempts to capture and hold this position from the Turks during the campaign. The first was during the landing on Gallipoli on 25 April. By the evening of that dayl a few men of the Australian 1st and 3rd Brigades lined Pope's Hill and Dead Man's Ridge, however, the men at Dead Man's Ridge were later order to fall back to Pope's Hill.

A week later, from 2 to 3 May, an attempt was made to extend the Australian line to the left of Quinn's Post. The 16th Battalion was ordered to advance to a position near Dead Man's Ridge, which was later called the Bloody Angle. The 13th Battalion was to extend its line to the left, joining with the New Zealand Otago Battalion, who were to attack Baby 700. The 15th Battalion were to take part from Pope's Hill. The initial attack was unsuccessful and attempts were made to reinforce the 16th Battalion with men from the Portsmouth Battalion. However, the Portsmouth Battalion were caught in Turkish machine gun, suffered high casualties and were unable to provide support. For the next three months no further attempts were made to advance and the Turks consolidated their position on Dead Man's Ridge, building a system of trenches.

During the August offensive, two squadrons of the 1st Light Horse Regiment attacked the trenches at Dead Man's Ridge from Pope's Hill. They reached it to the nearest of the trenches, which had been dug by the 13th Battalion in May and fought their way to the third trench, but ran out of bombs. They were unable to obtain support from the Nek or Quinn's Post, and, after holding parts of the trenches for two hours, were forced to withdraw.

This camera was owned by a man taking part in one of these advances and he either lost it during fighting, or was killed and his body left on the ridge with his equipment.