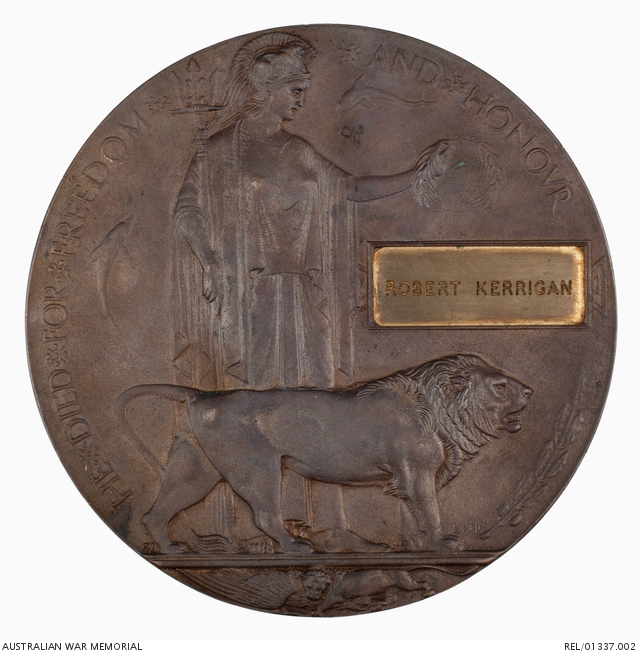 Bronze next of kin plaque, showing on the obverse, Britannia holding a laurel wreath, the British lion, dolphins, a spray of oak leaves and the words 'HE DIED FOR FREEDOM AND HONOUR' around the edge. Beneath the main figures, the British lion defeats the German eagle. The initials 'ECP', for the designer Edward Carter Preston appear above the lion's right forepaw. A raised rectangle above the lion's head bears the impressed name 'ROBERT KERRIGAN'. A checker's mark, '31', is impressed behind the lion's rear right paw and tail.

The original naming, in raised lettering, was incorrectly spelt. It was offically ground down and impressed with the correct spelling.

Associated with the service of Robert Kerrigan. Kerrigan was born in Ballarat, Victoria in 1874 and was forty years old on enlistment in the 15th Battalion AIF on 29 December 1914. Enlistment standards of the time required men to be no older than 35, resulting in Kerrigan falsely declaring his age as 29 years and 5 months on his enlistment papers.

Embarking overseas aboard HMAT Seang Choon on 13 February 1915 he disembarked in Egypt on 12 April and proceeded to join the Mediterranean Expeditionary Force. Landing at Gallipoli on 25 April, Kerrigan was mistakenly reported as wounded on 29 May. He had instead become lost in trenches and returned to duty with his unit on 31 May.

During the August assault on the summit of Hill 971, the highest point of the Sari Bair Ridge, Kerrigan was captured by the Turks and taken a prisoner of war.

He was interned at the Bozanti and Belemedik working camps before being transferred to Afion Kara Hissar on 25 January 1917. On 15 February Kerrigan died of malaria and was buried in the Armenian Cemetery at Afion Kara Hissar.

During the 1920s permanent Commonwealth war cemeteries were established and in 1927 Kerrigan was re-interred at the Baghdad (North Gate) War Cemetery, Iraq.