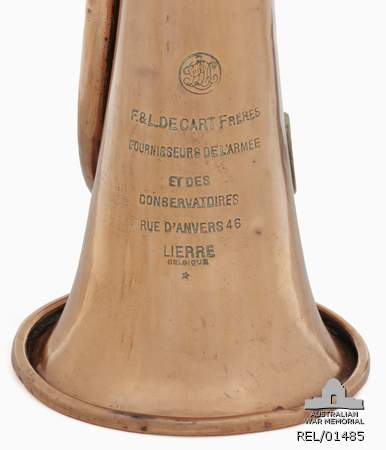 Standard B flat military bugle of soldered construction with all copper body and tubing and a brass mouthpiece extension tube. The end of this tube is split and fitted with a butterfly clamp collar for engaging the mouthpiece. There is no mouthpiece retaining chain fitted. The lower left of the bell and the inner rear tube are both fitted with a brass lozenge plate bearing a D ring, designed to secure the traditional cords (missing on this example). The upper bell is impressed with the stylised monograph of the De Cart brothers and the following: 'F. & L. De Cart Freres Fournisseurs De L'Armee Et Des Conservatoires Rue D'Anvers 46 Lierre Belgique [five pointed star]'. The bugle displays the signs of having been regularly polished.

The bugle was made by the firm of De Cart Brothers, which was established in 1850 by Alexander De Cart at Lier, Belgium, just south of Antwerp. His 'General Factory of Musical Instruments' was taken over by his sons Ferdinandus II (1864-1928) and Ludovicus (1869-1944) in 1890, with the firm becoming F & L De Cart Brothers. The appelation 'supplier of the Army and conservatories' started to appear on their brass instruments from 1894 increasing De Cart's market share with guaranteed sales to the military. It appears that after the First World War, which damaged the town in the 1914 German offensive, the brothers moved to Lisp Ivy 70. With Ferdinandus dead on 1928 and his brother ailing, the firm's management passed to Leon De Cart, its last owner. The De Cart firm faced active competition in Lier from other brass instrument makers, namely Van Engelen, Verstappen, Verhoeven, De Vries and Van Dessel.

This bugle was collected by Robert Luks, an Australian who served with the Royal Australian Naval Bridging Train under the name Luxbridge, during the First World War, lived and worked in Europe during much of the 1920s and 30s and amassed as a 'hobby' a substantial collection of German and French uniforms and headdress which dated from the beginning of the First World War before more practical less colourful uniforms and steel helmets were adopted. His collection was purchased in its entirety by the Australian War Memorial in 1937 as a means of providing colour to its displays and to demonstrate the changes which took place in combat uniforms between 1914 and 1916, when Australian troops entered the fighting on the Western Front.