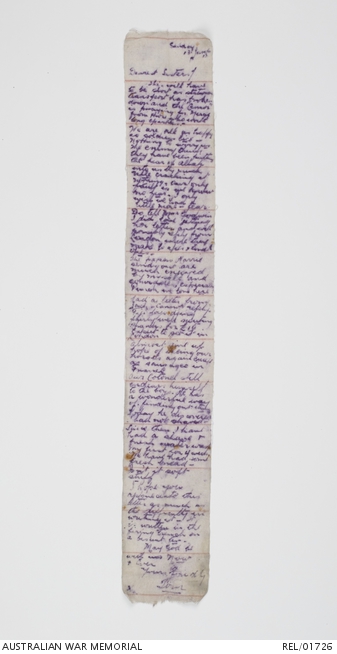 Letter dated 13 June 1915, written in indelible purple pencil on a strip of white cotton flannelette with fine red horizontal stripes used on the end of a pull through to clean rifles. The letter reads: 'Sunday 13 June 15/ Dearest Sisters// This will have to be short as stationery Transport has broken down and the "Cmdr" is praying for Mercy from those who write long epistles./ We are all as happy as soldiers lice - nothing to worry us. The enemy, they have been putting the Fear of Allah into us by much rifle cracking at nothing. Our only fault is in having no fear. I only wish we had a little more fear./ Do tell Mrs Goodwin I did love reading her letters and will possibly reply from London where they make to after Constantinople./ The papers Harrie sends out are much enjoyed by myself and comrades, especially Punch we love here. Had a letter from Jack Cannot reply....boys doing fairly well sweating. Thanks for 15 [pounds]. Expect to get it in London./ Almost give up hope of seeing our horses again except as sausages in France./ Our Colonel still endears himself to the boys. He has a wonderful way of finding out things. Today he discovered I had not shaved - Since then I have had a shave and a fresh water wash my first for 4 weeks. We have had served fresh bread - Isn't it soft stuff./ I hope you will appreciate this letter as much as the difficulty in writing it - It is written in the firing trench on a biscuit tin. May God be with us Now and Ever./ Yours Fondly Tom'.

This letter was written by 13/337 Thomas Victor Roberts, Auckland Mounted Rifles while in the front line at Walker's Ridge, Gallipoli on 13 June 1915.

Roberts was born in Ballarat, Victoria, in 1880 and moved with his parents to New South Wales as a child. He worked for two years with the bank of Australasia before becoming Auditor General, Assistant Prime Minister and Collector of Customs in the Kingdom of Tonga under the western Pacific High Commission.

He was living at Suva, Fiji when the First World War began and was a member of the Fiji Defence Force. He joined the Samoan Expeditionary Force with the service number 1/821 as a private and embarked from Suva as part of the Fiji contingent of the New Zealand force, bound for Samoa. The role of the force was to occupy and administer German controlled Samoa. After the capture of Samoa, Roberts joined the main body of the New Zealand Expeditionary Force, with the service number 13/337, and became a trooper in the Auckland Mounted Rifles.

The Auckland Mounted Rifles arrived at Gallipoli 12 May without their horses. The regiment served primarily at Walker's Ridge and Plugge's Plateau until the August offensives. On 6 August they captured Old No. 3 Post. Two days later, Roberts was wounded during the fighting around Chunuk Bair.

After the Gallipoli campaign Roberts served in England. He later joined the Australian Relief Expedition to Samoa and in 1918 married Vera Marguerite Perdriau. Roberts was the president of the North Sydney branch of the Returned Soldier's League and was a representative of the league on the commission of inquiry into the administration of war service homes. He began a business as a builder and accountant and in 1927 was nominated as the candidate for the Warringah Constitutional Club in the Warringah by-election caused by the resignation of Sir Granville Ryrie, but did not win the seat. Thomas Roberts died in 1947.