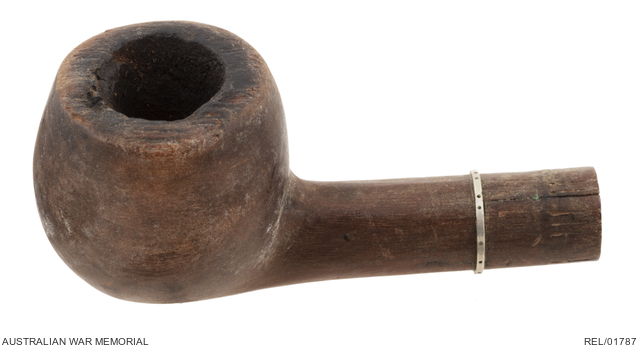 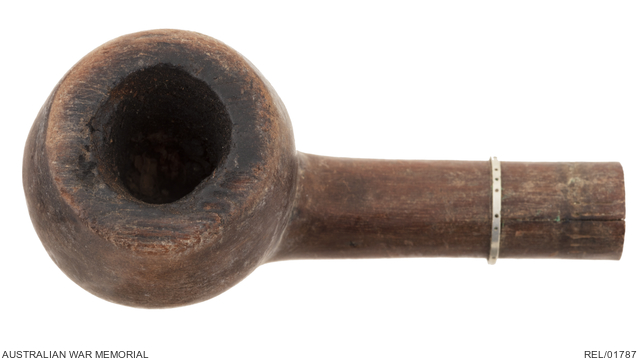 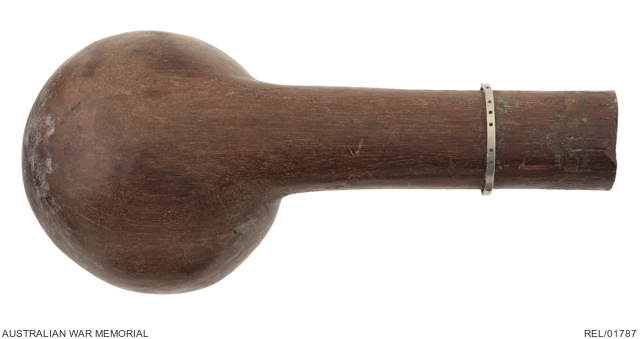 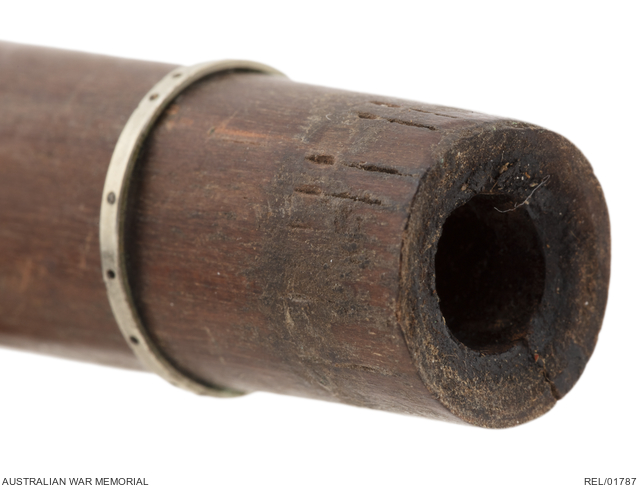 Bowl and shank only of a hand made smoking pipe, fashioned from teak, with the missing stem made out of water buffalo horn. The bowl shape bears a resemblance to a pot style of pipe. The shank has a thin aluminium ring around it, more for decoration than fulfilling any function.

Smoking pipe made from teak by Peter Albert Hocking whilst a prisoner of war of the Japanese. Hocking, born at Geelong, Victoria on 9 October 1916, was working as a French polisher and living at Carnegie, Victoria when he enlisted on 30 May 1940, aged 24. He had 4 years experience in the militia.

He was assigned to 2/2 Pioneer Battalion under service number VX19000 and after training, participated in the invasion of Syria, then under the control of the Vichy French. In the fight to recapture Fort Merdjayoun on 16-17 June 1941, the 2/2 Pioneers were ordered to fight as an infantry battalion despite their lack of training and equipment. Although attacking the Fort under cover of darkness, the battalion came under heavy fire and suffered heavy casualties when they were pinned down - 27 killed and 46 wounded; and when the French launched tanks out of the fort, they captured 38 Australians - Private Hocking amongst them.

The campaign was won by the allies less than a month later and the captured Australians were released. For that month though, Private Hocking was listed as 'missing in action', both on his service record and in the Australian papers. He spent a month in the 2/4 Field Hospital suffering from sandfly fever - a mosquito-borne condition known as pappataci fever – before rejoining his unit in September 1941.

In late January 1942, 7 Division sailed for Australia to meet the Japanese threat aboard the troopship 'Orcades'. They were diverted to Java (then known as Batavia) where they were seconded to ‘Blackforce’ under the command of Brigadier Arthur Blackburn in mid-February. Blackforce went into action at Leuwiliang near Buitenzorg on 4 March. It fought against the Japanese for two days but was ordered to lay down arms the day after the Dutch surrender on 8 March. Altogether 865 officers and men were taken prisoner.

At war's end Hocking was released from captivity in Changi, Singapore. He is thought to have worked on the Burma-Thailand Railway. While he was waiting for repatriation he was visited by 10 Military History Field Team who collected this pipe and recorded his ownership, as an example of POW improvisation.

hocking returned to Australia aboard the transport ship 'Moreton Bay' which disembarked at Melbourne on 30 October 1945. He was discharged from service on 5 January 1946.