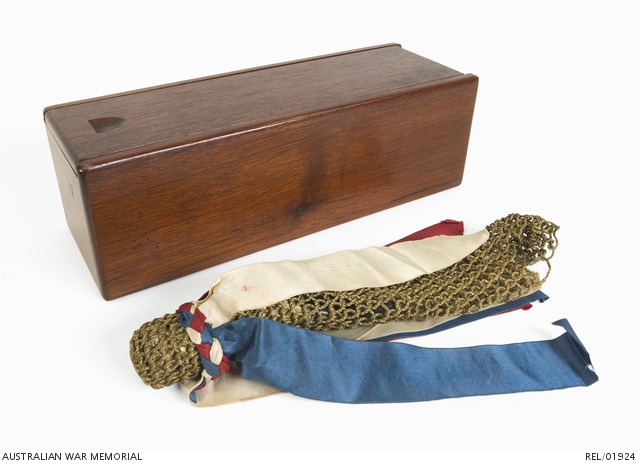 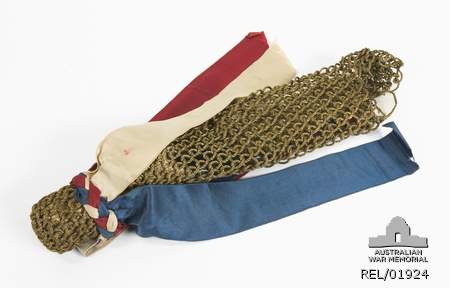 Neck of a champagne bottle enclosed in a gold bullion wire mesh bag. Tied around the neck of the bottle is a section of plaited blue, white and red ribbon with ribbon also hanging down the length of the bottle. Stored in a wooden box with a sliding lid.

The champagne bottle was used by Lady Alice Dixon at the launching of USS Canberra (CA-70) on 19 April 1943. Lady Dixon was the sponsor of USS Canberra, built by Bethlehem Steel Company of Quincy, Massachusetts and named as a tribute to the Australian cruiser HMAS Canberra which was lost off the Solomon Islands in 1942. The United States Navy ‘Baltimore’ class heavy gun cruiser received seven battle stars for service during the Second World War before being converted to a guided missile cruiser in 1952. In 1958 USS Canberra was designated as ceremonial flagship for the selection of the unknown servicemen of the Second World War and the Korean War. Initially, two unknown Second World War servicemen were selected, one from the Pacific Theatre and the other from the European Theatre. A ceremony was conducted on the USS Canberra to select one of the unknown servicemen of the Second World War to be buried at the Tomb of the Unknowns in Arlington National Cemetery. The unselected unknown serviceman was buried at sea with military honours by USS Canberra. After completing several Vietnam cruises between 1965 and 1969, USS Canberra was decommissioned in February 1970 and sold for scrap in July 1980.