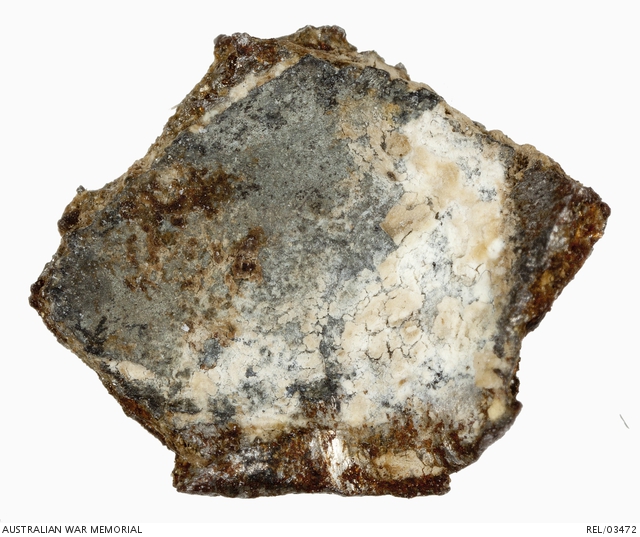 8 mm fragment of metal removed from the person of a German sailor wounded during the Emden's battle with HMAS Sydney.

Kept with a paper envelope, folded in four and badly torn. Front inscription reads : "Piece of shell taken by / Hugh [Hugh Bennet Lewers] out of German sailor / on Orvieto after capture / of Emden / Nov 1914".

Captain Hugh Bunnett Lewers removed this metal fragment from a German seaman on board HMAT Oriveto after the battle between HMAS Sydney and SMS Emden in November 1914.

Orvieto was the flagship of the first convoy which sailed from Fremantle, Western Australia for Egypt on 1 November. Two weeks later, Colombo, Ceylon (Sri Lanka) some officers and men from the captured German raider SMS Emden were transferred to Orvieto. On 20 November, one of these men was admitted to the ship's sick bay suffering a septic leg as a result of a shell splinter. It is likely this piece of shrapnel came from German seaman, but his name is unknown. The prisoners were transported to Egypt where they were then taken by HMS Hampshire to a prisoner of war camp on Malta.

Hugh Lewers was born on 6 September 1889 and was educated at Church of England Grammar and Trinity College in Melbourne. He spent some time in the cadets and had become a medical practitioner before enlisting 21 August 1914. He was attached to the Headquarters of the 1st Division Engineers as a captain and on 21 October 1914 he embarked on the Orvieto.

Lewers subsequently served at Gallipoli, where he was wounded before serving at Zeitoun Camp, Egypt after his recovery, where he became the Deputy Medical Officer.

Transferred to the 6th Field Ambulance, he served on the Western Front and as an Assistant Director of Medical Services, attached to the AIF medical section administration headquarters in England. He returned to France in mid 1918 and by September was commanding officer of the 11th Field Ambulance as lieutenant colonel.

At the beginning of 1919 Lewers was posted to 3rd Division Headquarters and travelled to France returning to England on 11 April to AIF headquarters. By early September 1920 Lewers had been discharged from the AIF. He returned to Australia and worked at the District Hospital in Bendigo before emigrating to England in August 1925. He died in Devon, England in 1950.