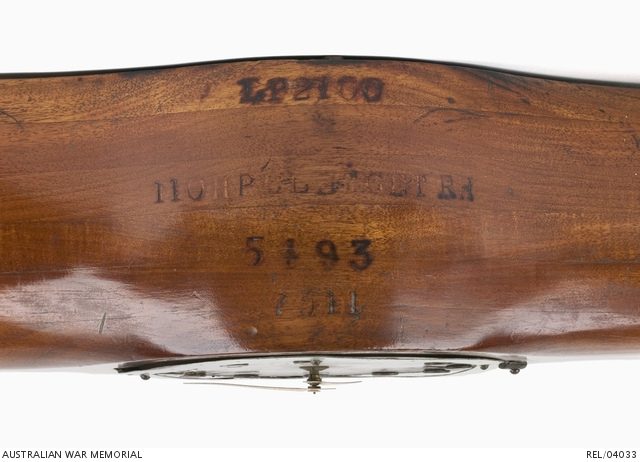 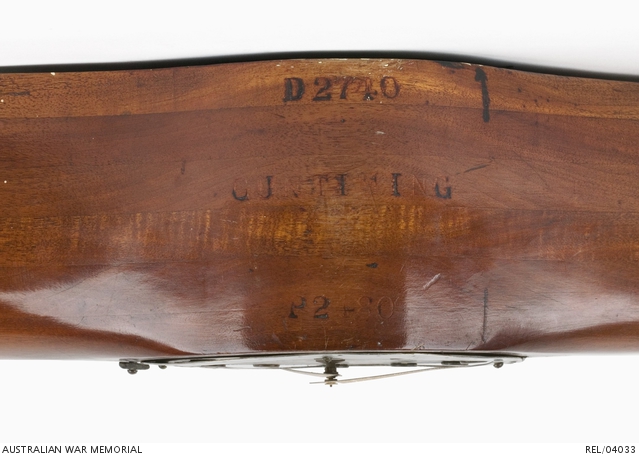 Propeller from Capt R.A. Little's Sopwith Triplane single seat fighter serial N.5493. Little was credited with shooting down 13 enemy aircraft in this aircraft. The propeller was damaged by his own gun when the synchronising mechanism failed to work correctly. The holes have been expertly repaired and the propeller has been cut into three sections. The middle section is approximately 830 mm long, has had a clock inserted in the propeller boss (200 mm diameter). The positions of the hours has been marked by inserting the base of .303 rounds at the position of the numerals. The cartridges have been cut around their base and the firing cap discharged by drilling holes in to the cap through the cartridge. The rounds on the face of the clock therefore appear to the eye to not have been fired. The ring that surrounds the firing cap has stamped into it "KN 1917, VII". The cartridges are the same as the rounds fired from the machine's single Vickers machine gun. The three sections are connected by dowels and metal straps. The electric clock mechanism is a modern replacement.

The clock face is composed of a natural metal (aluminium?) ring approx 15 mm wide and approx. 180 mm diameter around the metal face of the clock. The mechanism is hinged on one side and held in place by a small clip on the other side. The rear of the propeller is closed off by a metal plate.

The Propeller is made up from five laminations and varnished.
On one side of the propeller boss is stamped: D2740 (Diameter in mm)
GUNTTMING
P2480 (Pitch in mm)

This clock is fabricated from the hub of a propellor which came from an aircraft being flown by Captain R A Little, RNAS. The propellor was manufactured by Lang Propeller Co of Hamm Court Lane, Addlestone, Weybridge, Surrey, one of the leading makers of propellors during WWI. From 250 produced in 1914, the Company made fifteen thousand by 1918. The firm went into liquidation in 1922.

Robert Alexander (Bob) Little was born in Melbourne on 19 July 1895, in Melbourne, Australia. Joined the RNAS in 1915. Trained as pilot at Hendon at his own expense, qualified on 27 October 1916, after which he was commissioned. He flew in France on Bristol Scouts and Sopwith 1½ Strutter biplanes with 1 Wing before being posted to No.8 (Naval) Squadron on Sopwith Pup biplanes. He was credited with his first victory on 23 November 1916. The following March he was awarded the DSC, at which time he had achieved four victories. The unit then converted to the Sopwith Triplane. Little flew N5493, named ‘BLYMP’, the nick-name of Little’s son.

Little was awarded his first victory while flying N5493 on 28 April 1916. He was to be credited with 16 enemy aircraft shot down while flying N5493, the last on 10 July 1917, an Albatros D.V, for his 28th victory. At some stage this propellor was removed from his aircraft after being damaged. He then converted to flying Sopwith Camels.

On 27 May 1918, he was flying a Camel at night in search of Gotha bombers and was attacking the machine that was caught in a searchlight beam when he was struck by a bullet from the Gotha’s gunners or from the ground. It passed through both thighs, causing him to crash-land. He bled to death before help arrived. Little’s total score was at least 47 destroyed or out of control (OOC) and many more forced to land or driven down. He was the most successful Australian fighter pilot of the war. The centre of the propeller of the Triplane was turned into a clock by Captain Little's fellow airmen shortly after his death and was presented to his widow.

Married in September 1916, to Victoria Gertrude Field, the couple had a son. In accordance with his wishes his wife brought his son to be raised in Australia.

Little's former mount, N5493, was badly shot about in an engagement on 28 July 1917, while flown by Flt Sub-Lieutenant E.D. Crundall, who was unhurt in the incident. Triplane N5493 was lost on 18 September when it collided with a Spad S.VII of No. 19 Squadron piloted by Capt John Manley who was killed. The pilot of N5493, Flt Sub-Lieutenant Noel Stafford Wright, was also killed in the collision.