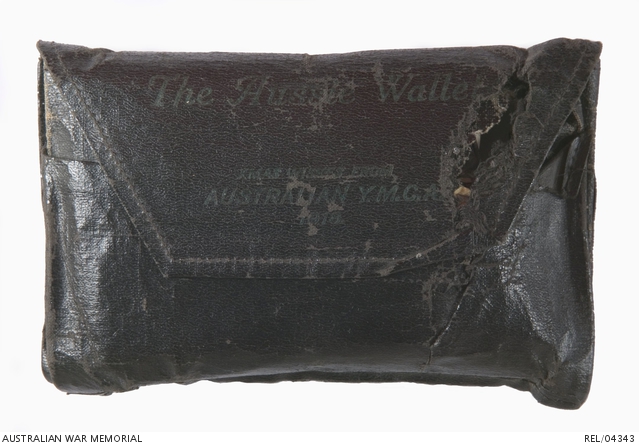 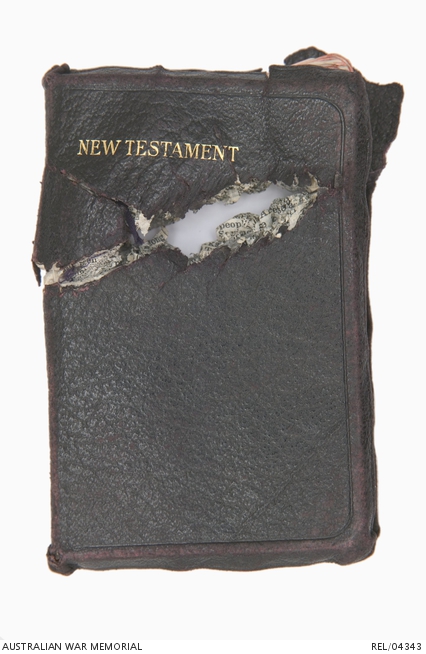 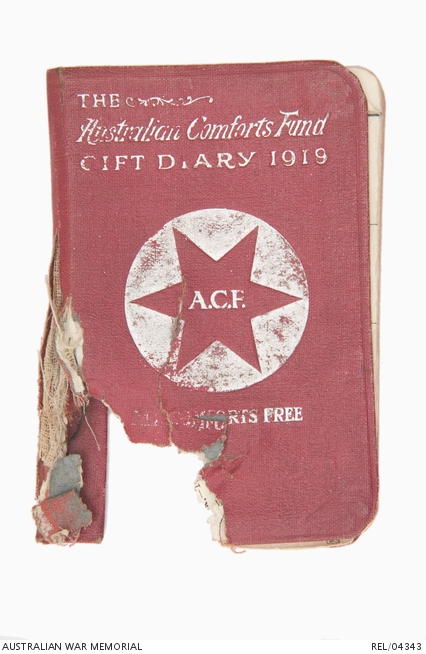 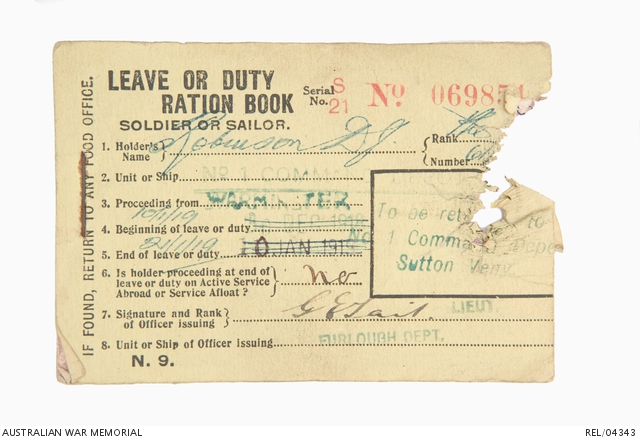 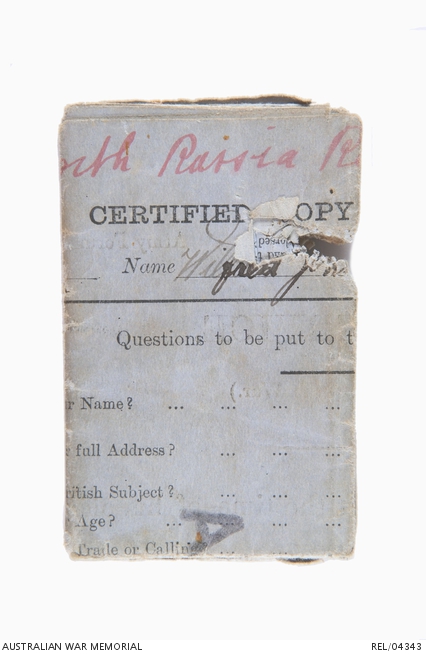 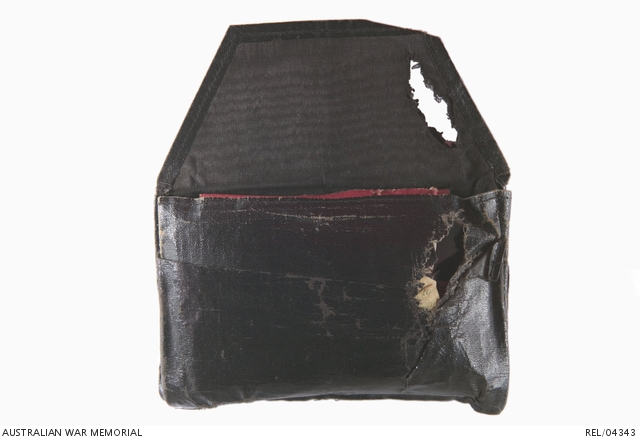 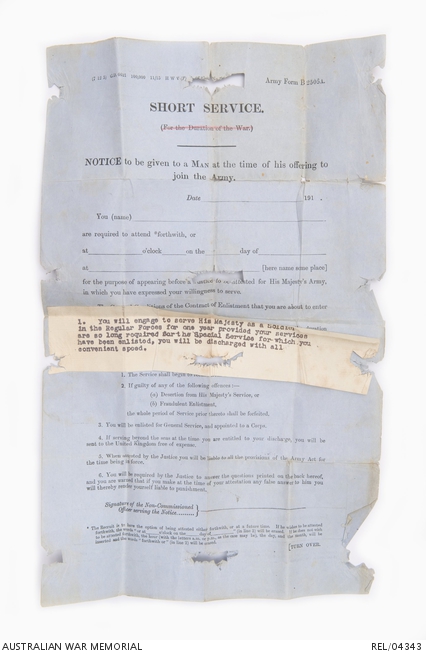 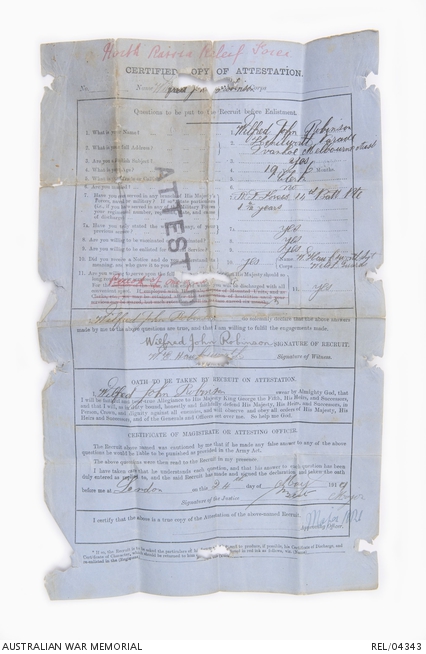 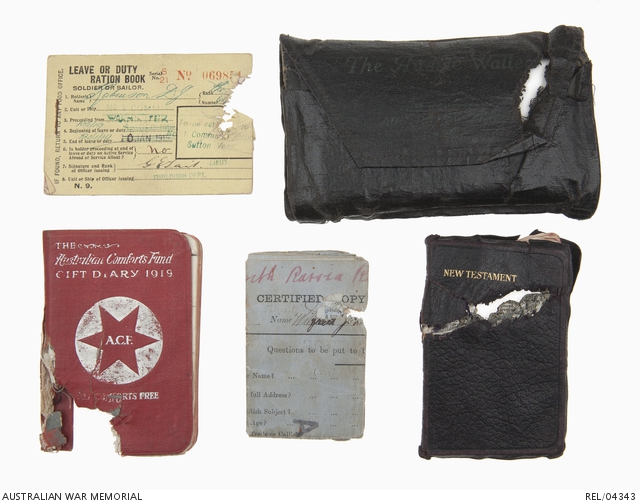 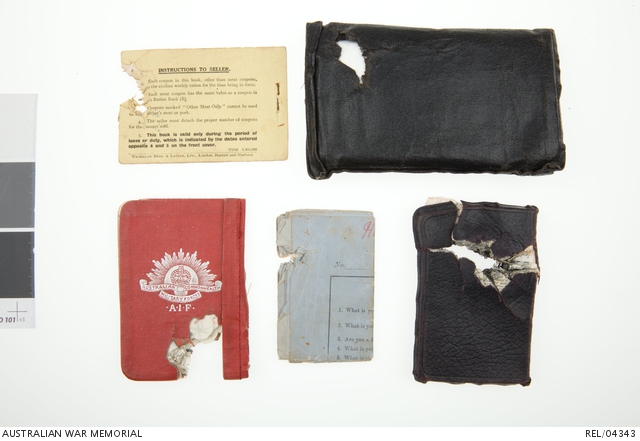 Black leather wallet with envelope-style flap opening. The flap is printed in large green letters with 'The Aussie Wallet'. Below this in smaller lettering the text reads 'XMAS WISHES FROM AUSTRALIAN Y.M.C.A. 1918'. A bullet hole has damaged the left hand side of the wallet piercing it all the way through. The contents of the wallet have also been damaged by the bullet. These are a yellow cardboard ration book, a folded blue certificate of attestation, a black leather-bound New Testament and a red gift diary for 1919 published by the Australian Comforts Fund.

This wallet was carried by Private Wilfred John Robinson during his service with the North Russia Relief Force in 1919. Robinson, a clerk from Ivanhoe in Melbourne, enlisted in the Australian Imperial Force on 1 December 1917 and was allotted the service number 61464. Sent overseas as a general service reinforcement, he later joined 14 Battalion. He was discharged from the AIF on 11 May 1919 and on the 24th of that month signed up in London with the North Russia Relief Force. He was aged 19 at the time. Robinson served in North Russia with 45 Battalion, Royal Fusiliers as a member of a Lewis gun crew in Brigadier General L W de V Sadlier-Jackson's Brigade. He was injured during the action at Emsta on 29 August 1919 for which his fellow Australian, Sergeant Samuel Pearse was posthumously awarded the Victoria Cross. Robinson carried this wallet, produced by the YMCA for Christmas 1918, with a diary, papers and bible, in his top breast pocket. It saved his life when it took the full force of the bullet which injured him.